The divine combination of Lata Mangeshkar and Sridevi When it came to ghost voices Sridevi was at her best when the Nightingale sang for her. Sridevi once told me, “When Lataji sings for me I feel half my job has already been done. She doesn’t only sing the lines she expresses the deepest emotions. We heroines just have to follow her voice.”

In turn Lataji says about Sridevi, “I love her work specially in Yash Chopraji’s films Chandni and Lamhe.I was her voice in both. I haven’t sung in too many films for her. But whatever I sang was special.”

Selecting the 5 best songs Of The Sridevi-Lata Mangeshkar combination:

1. Morni bagha ma bole aadhi raat ko(Lamhe): This is that moment of ecstatic eruption that singers seek for in their songs and seldom find.Lataji sang this fabulous Rajasthani folk song composed by Shiv-Hari with Ila Arun. When she saw Sridevi dancing to the song she felt as if the lyrics had taken flight in Sridevi’s body language. The song choreographed in the night in the Rajasthan deserts is an exquisite expression of the yearning for love.

2. Mere haathon mein nau nau chudiyan hai(Chandni): In the late 1980s Lataji had decided to quit playback singing to concentrate on classical music. But then Yash Chopra who was going through a lean phase in his career came to Lataji and told her he wanted her to sing for Chandni. Lataji was reluctant. Then Yash Chopra revealed it was for Sridevi. That’s when she agreed. This wedding song is a signature tune for Sridevi’s supreme sprightliness.

3. Tere mere hothon pe meethe meethe geet mitwa(Chandni): Combining with the little-known Mukhesh clone Babla Mehta, Lataji’s romantic song for Sridevi is among the most cherishable numbers the actress has ever sung. And her expressions on screen with Rishi Kapoor for company….oof! Let there be light, let there be romance, let there be Sridevi!!

4. Main teri dushman dushamn tu mera(Nagina): The biggest hit film of Sridevi’s career also contained the biggest hit song of her career. The story goes that Lataji didn’t want to sing this song. But composers Laxmikant-Pyarelal convinced her it would be a chartbuster and one of her biggest hits. And it was! A terrible film, people went back repeatedly to see it just to see Sridevi dance to this song.

5. Saat kunwaron mein ek kunwari(Farishtay): A completely neglected grossly underrated song in the Sridevi-Lata Mangeshkar repertoire, this Bappi Lahiri composition in one of Sridevi’s most awful films is a comedic canticle. Just hear how much mischief Lataji brings into the lyrics about a virgin girl and her seven virgin suitors.And then just watch Sridevi’s wild and wacky act to the song. Magic, sheer magic. There will never be another Lata Mangeshkar or Sridevi. And that combination? Forget it!

Must read: Lata Mangeshkar’s Songs Which Are Still Amazing To Watch LIVE 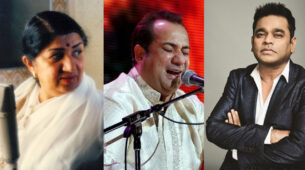 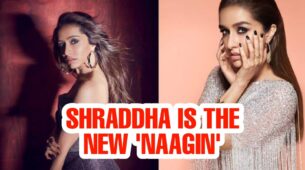 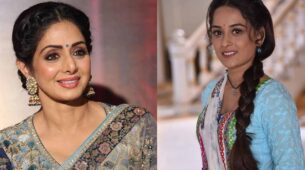