IWMBuzz brings forward to you the 'Super Singers Of The Year 2019' in this story. Read the story for more details It’s been, without any doubt, another fantastic year for Bollywood. There have been some top movies and the movies have had some equally nice songs to back them. It’s that time of the year again when we appreciate the voices behind those amazing songs. We bring forward to you our list of the Super Singers Of The Year (Independent Music)

Arjun Kanungo – This man has hit the apex of stardom slowly and steadily and a lot of credit goes to his independent music creations. His song Nike Nike shots is already popular, but 2019 has been a good year for Arjun because of his VYRL original ‘Hona Chaida’

Asees Kaur – Another popular name and face in the entertainment industry, Asees Kaur’s rise to stardom has been truly incredible. She truly made a mark with VYRL’s Intezaar alongside Arijit Singh, and she has made it count for sure with her body of work.

Arijit Singh – Is there any list you can keep this man away from? Be it songs in movies to independent songs, he’s there in it all and his Intezaar is the biggest example of that.

B Praak – The man and the voice behind Akshay Kumar’s first-ever music video in a career spanning over 25 years? Definitely deserves a mention. A quintessential debut for Nupur Sanon for sure.

Emiway Bantai – A name that shook the nation with just one viral song with exceptionally hilarious lyrics, Emiway Bantai’s ‘Machayenge’ has crossed more than 150M views and it’s a rage song for sure from 2019

Gajendra Verma – The ‘Tera Ghata’ man is simply everywhere. He hit the chartbuster list in 2018 with Tera Ghata and became a rage when he continued the success streak with ‘Ja Ja Ja’ in 2019. An automatic choice in the list.

Jonita Gandhi – Last but definitely not the least, Jonita Gandhi became a familiar name in every household with her song ‘Dil Ka Telephone’ from Dream Girl. But she also ensured that she is contributing to her single space and that’s where her ‘Humraahi’ in 2019 became the ideal number. A must feature for sure.

Give Yourself A Treat Of These Top 5 Arijit Singh's Songs 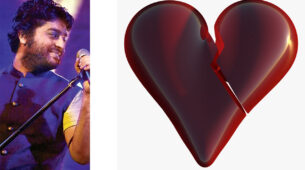