Who would be the true romance king in the Bollywood music industry? Arijit Singh or Atif Aslam Arijit Singh, with his voice, has managed to monopolize the whole of today’s industry. He is the one gem to have outshone all the others and has the magic to hook us all in an emotion. He was trained by the Hazari brothers and stepped into the limelight with his romantic voice for the movie Aashiqui 2 and surely his lovey-dovey songs have given as many romantic anthems and have surely set the standard very high. Some of his priceless numbers are Chahun Main Ya Na, Tum Hi Ho, Phir Mohabbat, Hamari Adhuri Kahani, and the list would go on and on. A true king in disguise for romance has given several songs for all the romeos out there.

Though he has had no musical background and not much of training, he is regarded as one of the top successful singers in Indian music to date. He has kidnapped the hearts of many through his melodic voice. The guy knows just right how to set the temperature high with his romantic voice. Having become more of an addiction, when we listen to his voice. He is a globally acclaimed singer. His hit songs are a must in your playlist. Doori, Meri Kahani, Dil Diya Gallan, Tere Sang Yara are few of his most notable vocals. Atif has many to his list to scour your romantic expectations high.

According to you, who would be the King of Romantic Vocals? Arijit Singh or Atif Aslam. 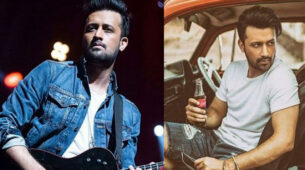