The one singer to have made some remarkable contributions to the industry is Shreya Ghoshal. She is one of the ace singers of Bollywood The one to have come a long way and might be compared to Lata Mangeshkar is Shreya Ghoshal. Her mellifluous voice has given us numerous memorable songs that are heavenly to listen to.

Here are a few noteworthy tracks by Shreya Ghoshal from top of her list:

Agar Tum Mil Jao is one of the best tracks by Shreya Ghoshal from the movie Zeher. It was the most loved song and had huge emotions to it that won the hearts of millions.

Dola Re Dola from the iconic movie Devdas starring Shah Rukh Khan. Not just the song had us all in awe but also the steps that perfectly synchronized with the music.

Sunn Raha Hai, the female version was sung by Shreya. And the song was well received by the audience. It was an amazing one that gave literal goosebumps.

Mere Dholna is a classic treat. From the movie Bhool Bhulaiyya, the song has high beats to it composed by Pritam. It is a highly energetic song that is like candy to one’s ear.

Pal Pal Har Pal, how can we not mention this song when talking about Shreya. Lage Raho Munnabhai gave us this refreshing track with Shreya and Sonu Nigam voicing it.

Well, these are the popular Shreya Ghoshal vocals that will go for a long time. Isn’t she the one singer we can never get tired of listening to? 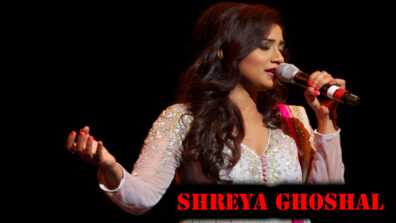