Darshan Raval is the current hit of the Bollywood music industry. He has taken the internet by storm with his hits. Here is his total net worth that will make you go OMG Born on 18th October 1994, Darshan Raval is one of the most amazing singers of the Bollywood music industry. He made his first appearance for reality show India’s Raw Star. And was the first runner up.
Darshan’s spotlight song was his first singles Tera Zikr that has 168 million views. This song was his major breakthrough and most loved. He learned how to play guitar from YouTube tutorial videos and not by any formal training.

Darshan Raval is the star amongst the celestial singers who shine the most. He has made quite a buzz in the music industry. The 25-year-old has a long way to go and he is already uphill on his road towards success. Talking about his net worth according to the sources of Wikipedia, Forbes, IMDB and various others, it is estimated that Darshan Raval has a net worth of approximately 58 million dollars. Such a young star and already on the peak of success may we wish him all his desires to come true and happiness all the way. He truly is an amazing singer. 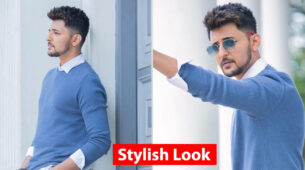