Mohammed Rafi was a boon that Bollywood was blessed with If anyone were to name the gem of the Indian music industry, Mohammed Rafi would be the name that will pop up.

He has given us many hits and he treated each song with love. He has the magic to get the listeners to experience a range of emotions in one go. A legend that was blessed to the Bollywood music industry.

He was very loved among the masses and at the time of his funeral, there were ten thousand people who came. Also as a tribute, there was in 2011, 9000 musical tributes made for his death anniversary.

Mohammed Rafi has also made a song as a tribute to Mahatma Gandhi, Bapuji Ki Amar Kahani, and Suno Suno Ae Duniyawalon.

He was a very versatile singer and his songs had been sung from patriotic to dance to romance. He also has sung Qawwali, Bhajans and others. He had inspired many singers of today’s times. Sonu Nigam had also been compared to Rafi and so was called Modern Rafi.

In 1948, he was honored with a silver medal by Prime Minister Jawaharlal Nehru and 1967, the Government of India awarded him with Padma Shri award.

We do miss this golden voice…

10 Mohammed Rafi's Songs About Missing Someone You Love 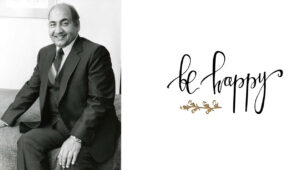 7 Mohammed Rafi's Songs That Will Make You Happy Instantly 6 Mohammed Rafi's Songs That Will Always Be Fans' Favourite