Best Songs to Sing in the Shower by Neha Kakkar Neha Kakkar is an Indian playback singer. She was born on 6 June in the year 1988. She made her Bollywood debut as a chorus singer in the movie Meerabai Not Out. She started her singing career by performing at religious events from the age of 4. She also participated in the singing reality show Indian Idol season 2, but she was eliminated early. She had made herself known after the release of the dance track Second Hand Jawani from the movie Cocktail, followed by many other popular party songs like Sunny Sunny from the movie Yaariyan, London Thumakda from the movie Queen.

Thereafter she almost performed party tracks like Aao Raja from movie Gabbar Is Back, Kar Gayi Chull from the movie Kapoor And Sons, etc. With the release of Mile Ho Tum from the movie Fever in the year 2016, which topped the list of most-viewed Bollywood songs on YouTube After this song Neha Kakkar also proved her versatility in musical range.

Neha Kakkar is now in the list of most distinct voices in the Music Industry. She has made every one of us fall in love with her voice.

Here are some Neha Kakkar songs to sing in the shower:

Must Read: Hot Neha Kakkar Shares A Perfect Breakfast Table Pic From Goa: Have A Look

3. Dilbar from the movie Sathyameva Jayate in the year 2018-


Must Read: Neha Kakkar Top Hottest Pics Of The Year 2020

7. Kala Chashma from the movie Baar Baar Dekho in the year 2018-

8. Main Tera boyfriend from the movie Raabta in the year 2017-


Must Read: Rohanpreet Singh Shares An Emotional Moment On The Sets Of Indian Idol About Him & Neha Kakkar: 'He Made Me Cry' Says Neha

Also Read: These Neha Kakkar’s Songs Up Till Now In 2020 Will Keep You Warm 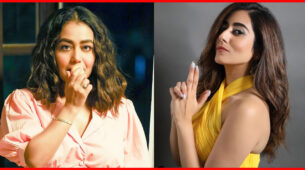 Neha Kakkar Or Jonita Gandhi: Who Is The Musical Queen Of Hotness?