Following Lata Mangeshkar, no wonder Shreya Ghoshal is all set to walk in her footsteps The one to have made a debut with the film Devdas in 2002 and given some blockbuster songs like Silsila Ye Chahat Ka, Bairi Piya, Dola Re Dola, and many amazing more. Surely, Shreya Ghoshal gave a smashing performance since her debut and had to date continued to soaring high with success.

Timeless beauty Shreya Ghoshal is the cuckoo of the music industry. Her voice is not just versatile but also very soft and distinctive from the others. And hence, her notes directly hit the soul. Like every other artist, she participated in a reality television show and was noticed by Sanjay Leela Bhansali. The latter offered her to sing for his upcoming movie, i.e., Devdas right after her show ended. Surely, she has the devil’s luck and a voice like honey.

Shreya Ghoshal had a dreamy start with roaring success when she was a teenager. And since then, she kept learning and working with her voice to become versatile and adored by millions.

There will be no replacement to such a melodic voice as Shreya Ghoshal. She is the Koyal of the music industry just right after Lata Mangeshkar, and there is no denying to the same. 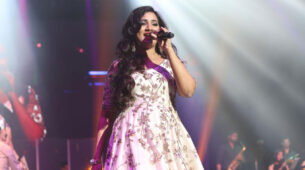