It wouldn’t happen every day that all four legends were to be found under one roof. Here was the time when Lata Mangeshkar, Mohammed Rafi, Mukesh, and Kishore Kumar met for a song Manmohan Desai was the director during the 70s and 80s and every artist aspired to work with him. He was one who made the impossible come true. He managed to get all the four legends under one roof working together. This happened for the movie Amar Akbar Anthony,

For the movie, Amar, Akbar, Anthony, Manmohan Desai asked all the legend singers to sing for the song Humko Tumse Ho Gaya Hai Pyar Kya Karen. And probably that was the first and last time we would ever see a song in which Mohammed Rafi, Kishore Kumar, Mukesh, and Lata Mangeshkar all sang and worked together. 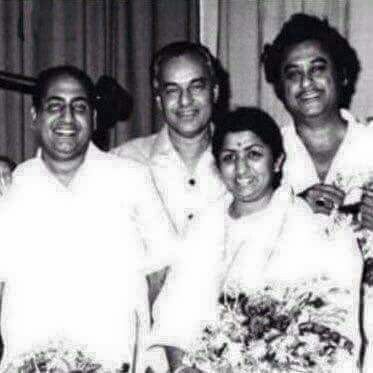 Indeed it is something rare and amusing fact that is associated with the song only example in history of Hindi film where the four most respected stars of our Indian cinema performed together in a song for the entire lead cast. Mohammed Rafi sang for Rishi Kapoor, Kishore Kumar for Amitabh Bachchan, Mukesh for Vinod Khanna and Lata Mangeshkar sang for all the three female actresses Shabana Azmi, Neetu Singh, and Praveen Babi.

And to earn some more brownie points on the song, it was composed by Laxmikant Pyarelal another legendary composer. That made the song best of all other tracks in the movie.