Life of Atif Aslam beyond being a well-known singer. Here's what you need to know The most well-established singer in the Bollywood, Atif Aslam has made a lasting impression on the music industry. His songs are favorite across generations. Here is the story of Atif Aslam from his budding days to becoming a massive star that he is.

Atif Aslam was born in a Punjabi Muslim family in Wazirabad, Punjab, Pakistan. He is a degree holder in computer science. He became a singer without any formal training in music. During his college days after being persuaded by his peers to take part in singing, he started to participate in competitions and later thought of taking up singing as a career. He was a national team player of cricket. He was the best bowler, but when there are plans stored for you by destiny, everything gets unfolded one thing at a time, and he became a hit singer.

Atif Aslam is loved for the unique style of belting his voice. That makes his tracks more versatile. He presently sings at Coke studio and has composed some significant number of Ghazals that are heartwarming. He was a part of a band called Jal, a lead singer. The song that was funded by Atif Aslam from his pocket money. The song was released in 2003 and was a hit youth anthem.

Later, Atif Aslam parted his ways from the band and started singing solos. And made a debut with several songs that were significant chartbusters throughout the subcontinent. One of the hit songs was Jal Pari. He made his Bollywood debut for Mahesh Bhatt’s film Zeher with the track Woh Lamhey.

After numerous blockbusters and having a successful career, Atif Aslam became a major global hit. He had countless international concerts. He was the topping name amongst leading singers like Swedish House Mafia, Pitbull, Enrique Iglesias, and many others.

Atif Aslam is one of the massive stars that has left a lasting impression on the music industry with his immense contribution. Indeed, he is a great singer blessed with such a magnificent voice.

Also Read: 10 Atif Aslam’s Romantic Songs That Give Us The Feels 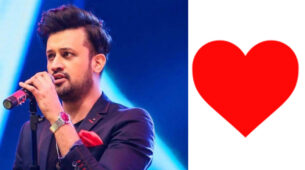