Check out the impeccable record of the fastest T20 half-century by Yuvraj Singh! The former Indian cricketer, Yuvraj Singh is known for a list of amazing world-class records. He was one of the remarkable players that Indian cricket has produced. The all-rounder middle-order has made every critic speechless with his performances. Be it in the case of bowling, or batting, Yuvraj has mastered every sphere of cricket. It’s really hard to knock him out when he is on the field. Yuvraj Singh’s aggressive batting style has helped him a lot of times to score a high run rate. He has received love and support from his fans.

Also read: Watch Video: Yuvraj Singh’s 6 Sixes In One Over

Yuvraj’s record list includes – scoring six consecutive sixes in a single over at Stuart Board, scoring the fastest 50s in Twenty20 International and other T20 matches, first-ever player to drop 5-wicket and score a 50 in the same World Cup match, and many more. Among all the records, his fastest half-century in T20s remains at the top after the Stuart Board one. Yuvraj was a great run-scorer. He had the ability to strike the balls to the boundaries and gain a number of 4s and 6s. It was 2006 when Yuvraj scored the fasted half-century at Durban, South Africa, against England in the T20 match. He reached the 50th run in just 50 balls, which was impeccable for the fans, and terrible for England.

Since then, it is the Jamaican player, Chris Gayle who tried to break the record in 2016. And later, it was Hazratullah Zazai, the Afghan cricketer who stepped up to make the record with them in 2018. No one yet did break the record to date. It was Yuvraj who was the first one to score the fastest T20 century. 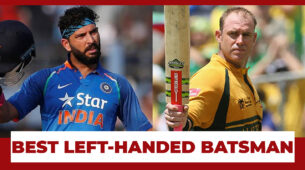