Check out the best ever IPL catches by the South African cricketer, AB de Villiers in the IPL history! AB de Villiers, the South African cricketer, is a great international batsman and a fielder. The aggressive middle-order, the wicket-keeper batsman has been ICC ODI Player of the Year three times during his 15 years of an international career. Although AB de Villiers has retired from international cricket, he is still seen in the Indian Premier League (IPL). One cannot compare his batting style. But one more thing that he is good at is fielding. He is well-known for some epic catches. AB de Villers also put a lot of effort into catching a ball.

Also read: Virat Kohli – AB de Villiers: The Bromance We Are All Jealous Of

AB de Villiers is regarded as one of the best fielders in the history of international cricket. The player’s acrobatic way of fielding is just fantastic and problematic for the opponent team. He has got over 217 catches with a rate of 0.632 catches, per innings. He holds the record of highest catches in a Test innings with 11 catches in total. Not only in the international tournaments but also in the IPL, AB de Villiers has nailed it with his epic catches. He is also called as ‘AB-man’, with the reference to Spiderman and Superman. One can never forget the free charge bolt moment that he made to catch the ball against Mumbai Indians (MI), on the behalf of his team Royal Challengers Bangalore (RCB) in IPL 2016’s 41st Match. He has made some remarkable catches in the IPL history that never be forgotten. Best IPL Catches From Ben Stokes We Will Never Forget Best IPL Catches From Trent Boult We Will Never Forget Best IPL Catches From Tim Southee We Will Never Forget 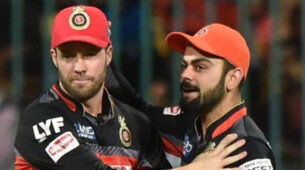