Rumours about cricketer KL Rahul and actress Athiya Shetty dating surfaced in the media, find out more about it… Bollywood stars and cricketers have always been linked up. Cricketer KL Rahul and Athiya Shetty are a new addition to the list of cricketers and actress link-ups. There were reports at the beginning of the year that the cricketer and actress were dating. Earlier there were rumours about KL Rahul dating another woman, but he never opened up about his relationship in the public.

The couple never stepped out together in public and never made anything official about their relationships. However, according to the sources, the duo had been going around each other and started dating somewhere at the beginning of 2019. Later, news reports suggested that the duo had been out for a vacation in Thailand. Also, a common friend of these two had posted a picture where the three of them were smiling for a selfie. Suniel Shetty’s statement about his daughter dating somebody saying he was fond of the guy she was dating further raised speculations about their relationship. Furthermore, on KL Rahul’s birthday, Athiya Shetty shared a birthday wish on Instagram with a caption saying ‘my person’ made things a little clearer and chances of them being in a serious relationship seem really high. 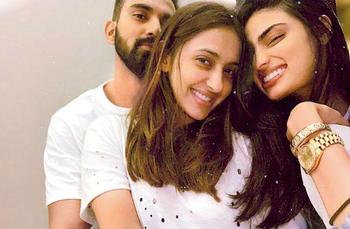