The first world cup winning captain of India, Kapil Dev was a guest on the show Jio Dhan Dhana Dhan hosted by Sameer Kochhar. The show was a perfect combination of cricket and comedy. While the show was on and the cricketer and the host were discussing cricket, comedian Sunil Grover made an entry on stage dressed like Kapil Dev. Well, when there’s Sunil Grover, all you can expect is mind-blowing humour.  In the show, he essayed the character of professor LBW and the former captain couldn’t contain his laughter at the comedian’s entry itself.

Kapil Dev got clean bowled by Sunil’s comic timing. Sunil Grover imitated Kapil Dev’s style flawlessly. He did it so well that the world cup winning captain couldn’t control his laughter. Grover’s performance was really a good one and it gave Kapil uncontrollable laughter. The comedian spoke about normal things but in the Kapil Dev’s cricket language. Right from the cricketer’s style of talking to his style of laughing and perfect expressions, everything was mimicked so well, that the legendary cricketer was in awe of the comedian. Kapil Dev was all praises about Grover and the all-rounder cricketer even said, “Sunil Ka Jawab nahi.” It was fun to see the Indian captain laughing so hard and enjoying his own style being imitated. 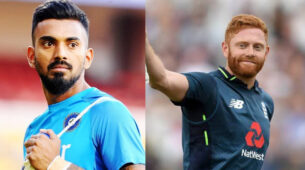