Who is the best entertainer on the cricket field among Kieron Pollard and Andre Russel? Kieron Pollard is a Trinidadian cricketer who captains the West Indies cricket team in limited-overs cricket. An all-rounder, Pollard is a medium-pace bowler and big-hitting batsman in the middle-order. An aggressive batsman, with a penchant to clear the boundary with ease, he relies on hitting the ball out of the park. As a fielder, Kieron Pollard is one of the best in the world and has taken some unbelievable catches. Well, apart from being a great cricketer, he is also one of the fun-loving cricketers. Instances like taping the mouth to control sledging, confusing the umpires or dancing on the field amidst a match, he has a funny bone inside him.

On the contrary, we have Andre Russel who plays for West Indies Cricket Team internationally. He is widely regarded as one of the greatest T20 players to have ever played the game. A bustling pacer, he is a powerful lower middle-order batsman too. Andre Russel has shown his magic in international cricket as well as IPL. The Jamaican cricketer enjoys playing cricket and tends to entertain fans and fellow cricketers on and off the field. From singing Bollywood songs to giving some of the hilarious expressions in the middle of the match, Andre Russel has been entertaining us for years.

Let us know who do you think as the best entertainer on the field among these two West Indies cricketers. Kieron Pollard Vs Chris Gayle: Who Do You Want In Your Fantasy IPLT20 Team? 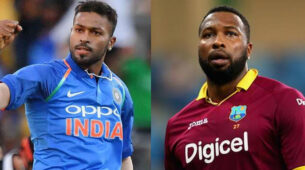 Hardik Pandya - Kieron Pollard: The Bromance We All Are Jealous Of 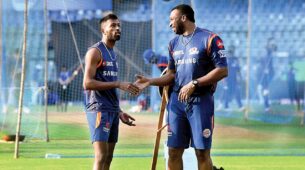 Hardik Pandya - Kieron Pollard: The Brotherly Bond We All Adore