The image of Sourav Ganguly taking off his shirt and waving it from the balcony of Lord’s has remained etched in the memories of fans to date. July 13, 2002, will forever be rightfully remembered for the heroic partnership between the Man of the Match, Mohammad Kaif, and Yuvraj Singh, that clinched India the Natwest Series. However, not many people know how Ganguly’s teammates had reacted when the former India captain took off his shirt.

In the web show Breakfast with Champions, when the host Gaurav Kapur asked him about the Lord’s moment, Ganguly revealed that VVS Laxman tried to stop him from taking off his jersey. The former captain said, “I was standing on the right side. VVS Laxman was on my left and Harbhajan Singh was behind my back. So, as I was removing my T-shirt, VVS tried to tell me, ‘Don’t do it, don’t do it!’ After I removed my shirt, he asked, ‘What do I do now?’ And I said, ‘You also remove your shirt!” Well, it was a spur of the moment reaction to a sensational series victory. 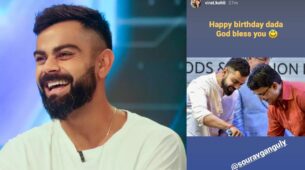