Virender Sehwag, the eminent former Indian cricketer, has great histories and made his name prominent in the history of Indian cricket. The former player was one of the most destructive and powerful batsmen of all time. Virender Sehwag was an amazing right-handed opening batsman. He had many skillful techniques and got a number of powerful knocks on the field. Virender Sehwag has done wonders in all the three formats – T20s, Tests, and ODIs (One Day Internationals). The player has stored the balls towards the boundaries and has scored centuries, multiple times in his lifetime.

Virender Sehwag has made a number of amazing records during his tenure. The ODI double century record remains one of the remarkable ones. It was December 8, 2011, in the India vs West Indies ODI match, in Holkar Cricket Stadium, Indore, when he became the second cricketer in India, as well as in the entire world to score a double century. Virender scored an incredible record of 219 runs, which made the world amazed. He scored it in just 149 deliveries. The player hit 25 fours and 7 sixes and made everyone’s jaw drop. India went on winning the match against West Indies with an amazing score of 418/5, just because of Virender Sehwag, and won the match with 153 runs.

The incredible ODI double century record by Virender Sehwag will be remembered forever by many Indian cricket fans. He will be cherished permanently and so will his world-class double century ODI record. 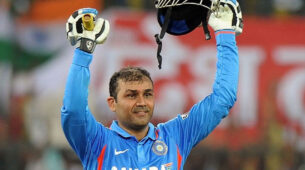 Virender Sehwag shares a picture of his 20-year-old self