To give the opponent a dose of their own medicine, this is what the story is… Sourav Ganguly and Andrew Flintoff have had a remarkable journey as cricketers. Their contribution to international cricket is always remembered by cricket fans all around the world. But both these players are also remembered for their historic shirt wave after winning the match in the opponent’s home ground.

In the month of July 2002, India and England were playing a six-match ODI series and the final game was played at Wankhede Stadium in Mumbai. The match was going down to the wire with India needing 11 runs from the final over. Flintoff was entrusted to do the job by his captain, Nasser Hussain. He went for five runs on the first three deliveries and it looked like the pair of Hemang Badani and Anil Kumble will do the job. However, that didn’t happen. Flintoff, the hero of the match for England, came up with wild celebrations in the middle and removed his t-shirt in front of thousands of Indian fans, which pinched the Indian team and fans.

Later in the same year, India was playing against England at Lord’s the NatWest tri-series final. From 106 for 0, India went to 146 for 5, losing, Dada, Virender Sehwag, Dinesh Mongia, Rahul Dravid and Sachin Tendulkar in the process. The chase looked improbable but not for Yuvraj and Kaif who scripted one of the most memorable wins in the history of Indian cricket. As Mohammad Kaif and Zaheer Khan completed the winning run, Sourav Ganguly took off his shirt at the Lord’s balcony which was a strong reply to the England all-rounder Andrew Flintoff who did the same after securing a victory against India in Mumbai. While Ganguly will be remembered for his match-winning knocks and aggressive captaincy, that he showed Flintoff who is the real Dada in cricket.

This story is as iconic as the cricketers were! 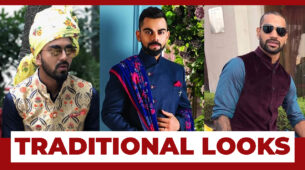