Check out the time when Jonty Rhodes made records and created histories with his mind-blowing fielding skills! Jonty Rhodes, the former South African cricketer is still considered to be one of the best fielders of all time in the world. Jonty Rhodes was seen representing his nation in the Test and One Day International (ODI) cricket between 1992 and 2003. He was an efficient right-handed batsman and an occasional right-arm medium bowler. Jonty Rhodes became the man behind several run-outs during the 1990s. It was very difficult for the batsmen to escape from the hands of Jonty Rhodes when it came to runs. He has proved the world with his amazing fieldsman skills.

Jonty Rhodes made records like the non-wicketkeeper fielder to take 5 wickets down in a single match against West Indies, on 14 November 1993. He has also the record of the ninth-highest number of run-outs in ODI cricket since 1999 Cricket World Cup, as per the Cricinfo report prepared in later 2005. Jonty Rhodes was mostly seen fielding in the backward point of the field. His sharp observation and aerobatic skills have allowed him to be one of the greatest fielders of all time. He became the first-ever South African cricketer to get 100 ODI catches in the history of cricket. His performance in the World Cup 1992 was worth it when he took several runouts. He was often called by the names like ‘bird’ and ‘superman’ by his fans for his efforts to take a catch.

Here we have got a video of Jonty Rhodes and his best-ever catches that created history with his amazing fielding skills. Have a look at it! 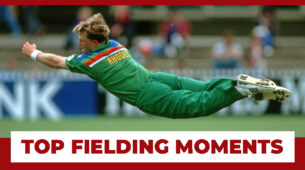