Shikhar Dhawan can bring a storm in the stadium with his amazing skills. Here are the times when he proved himself as ‘Gabbar’. Check out! Shikhar Dhawan, the phenomenal left-handed Indian batsman known for his lustrous form that comes just before the World Cup. He has shown brilliant courage and sportsmanship on and off the field.

However, there are some unique moments that truly define who ‘Gabbar’ actually is.

So, here’s our top 3 list for Shikhar Dhawan’s top knocks for Team India.

1. In India’s 2015 World Cup campaign, Dhawan was India’s highest run-getter with 412 runs, scoring at an average in excess of 50, with two crucial knocks in pressure games against major teams – 137 against South Africa, and a useful 73 against Pakistan. That really did come in use when none of the top order was firing ‘Gabbar’ saved the day.

2. During the IPL Scenario of his life, he was released from Delhi Daredevils to Mumbai Indians that took a major downhill in his career. After that, he moved to Deccan Chargers in the fourth season and regain his form and went on to be one of the highest run-getters in the tournament. Not only with Deccan Chargers also with Sunrisers Hyderabad, his consistent touch of top-order partnerships with David Warner boosted the weak batting side of SRH and then went on to win their IPL Trophy with them in 2016.

3. Shikhar Dhawan made his Test debut in the Test at Mohali on 14 March, receiving the cap from Sachin Tendulkar who said to him: “We have known you as a very gutsy player in domestic cricket, now we hope to see you as a gutsy player in international cricket, so show us some guts.” After that rain played a spoilsport in the match but after India got the batting Dhawan played a sensational 185 not out to ensure that their team got a lead in that test thus, marking his name in the Indian History of Cricketers.

Tell us your opinion and stay tuned for more such updates. 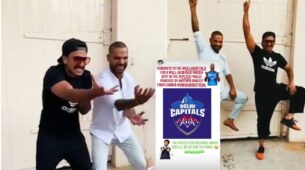