Cricketers like Yuzvendra Chahal, Virender Sehwag, Irfan Pathan and many others are hooked by TikTok during the quarantine… Home quarantine during the Coronavirus pandemic has led to the cricketers with not much to do. With IPL suspended indefinitely and no signs of cricket resuming soon, cricketers are finding time to keep themselves entertained. A few cricketers like Yuzvendra Chahal, Irfan Pathan, Virender Sehwag, David Warner and many others are busy making videos on the Chinese video-sharing social networking service, TikTok.

Yuzvendra Chahal: The Indian bowler Yuzvendra Chahal has been active on TikTok during the quarantine and is getting better at it day by day. He boasts of almost 4 million followers on TikTok and uploads some of the hilarious videos every now and then.

Virender Sehwag: Virender Sehwag ever since his retirement from the game, has been doing some hilarious things on social media. It goes without saying that Sehwag has put up some entertaining videos on his TikTok account.

Irfan Pathan: Irfan Pathan is one of the most loved cricketers across the country. He has shared about 150 videos on TikTok. From his cricketing heroics to his family to his work-related fun, Irfan Pathan has posted videos related to everything on TikTok.

Mohammed Shami: Mohammed Shami has been spending a considerable amount of time during the quarantine in making TikTok videos. His posts are as hilarious as they could get.

Chris Gayle: West Indies cricketer Chris Gayle has been mostly sharing the videos of him enjoying on TikTok making the perfect use of the app.

Shoaib Akhtar: Shoaib Akhtar has only joined TikTok during the self-quarantine time and posted one of his best yorkers’ video to make his debut. So far he has used TikTok to tell his fans about how to spend time while staying at home.

Kevin Pietersen: Kevin Pietersen was one of the best England cricketers ever. And even he couldn’t keep himself away from TikTok. He was excited to make his debut and got an overwhelming response for his first video. 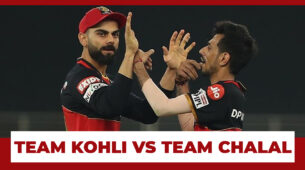 IPL 2020: THIS Is How Team Kohli Gets Beaten By Team Chahal In RCB Practice Match