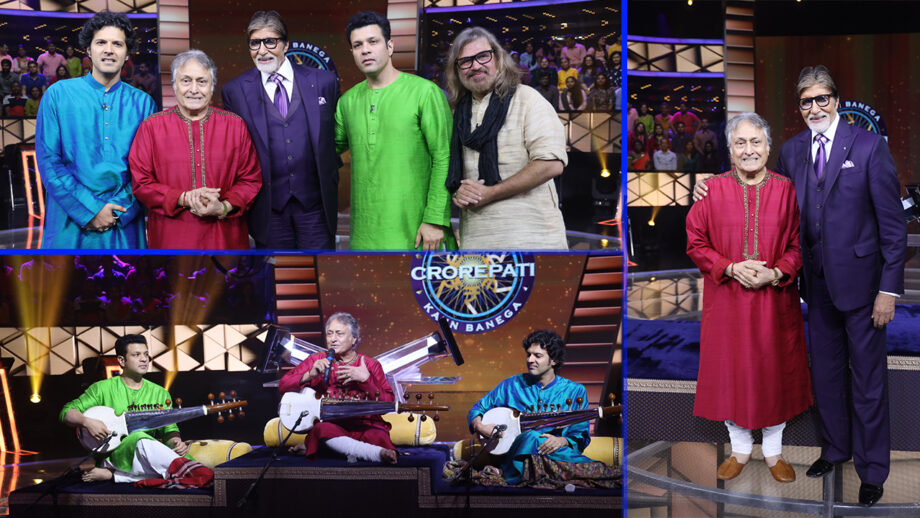 ‘Rishten mein toh hum tumhare baap lagte hain…Naam hain Shahenshah’, be it anywhere in the world, whenever anybody comes across this dialogue, the only name that comes on one’s mind is ‘Amitabh Bachchan’. In 1969 Bollywood got its Superstar who proudly made a name for himself and has been ‘Shahenshah’ ever since then. With 77 years now and over 300 blockbuster movies under his belt he is continuing to rock with his evergreen charm. He is a true inspiration for people across age groups.

This year Bollywood’s angry young man is going to turn 77 with his 11th edition of Kaun Banega Crorepati on Sony Entertainment Television. The start of the weekend will be a full-on entertainment retreat for the viewers as AB’s birthday special will be celebrated with a surprise from Ustad Amjad Ali Khan. Accompanying him will be his son Amaan Ali Khan and Ayaan Ali Khan. Surprises will un-fold as eminent sarod player Amjad Ali Khan Sahab will introduce and dedicate a new raag named ‘Harivansh Kalayan’ to Amitabh Bachchan.

The celebration will go a notch higher as KBC will host its Karamveer special episode. Gracing the sets will be Paralympic champions Deepa Malik and Manasi Joshi. Deepa Malik is an Indian athlete who is the first Indian woman to win a medal in Paralympic Games and won a Silver medal at the 2016 Summer Paralympics in the shot put. She has also won gold in F-53/54 Javelin event at the para athletic grand Prix held in Dubai in 2018. Manasi Joshi is a para-Badminton athlete who is currently World No. 2 in SL3 Singles.

It will be a fun-filled episode where Amitabh Bachchan will be seen stoking to have so many surprises that will truly make him speechless. The episode will inspire millions of people throughout the world where Deepa Malik and Manasi Joshi unveil their struggle and how they overcame their obstacles which truly defines the campaign #adeyraho

Most entertaining and fun moments of KBC throughout the seasons

Randeep Hooda on the sets of Kaun Banega Crorepati

Review of Sony TV’s Kaun Banega Crorepati Season 11: As entertaining as ever, with the Bachchan charm out in full glory!

Being the quiz master is a different kettle of fish: Meiyang Chang