Which 5 actresses played the role of Draupadi? Check out!

There have been many actresses who auditioned for the role but only the best and the perfect bags to the role, right? Every Mahabharat’s creator may have gone through this tough decision of selecting the best Draupadi but at last, they got their right Draupadi. Today, we are going through the past times when the tv actresses played the iconic role of Draupadi.

It was back in 2008 when Ekta Kapoor brought Kahaani Hamaaray Mahaabhaarat Ki. This show had Anita Hassanandani as Draupadi. The show was not liked by fans as it showed the modern characters in the show with Draupadi having a tattoo on her shoulder.

In 2001 mythological show, there came a series named Draupadi in which Mrinal Kulkarni played the lead Draupadi. She became quite popular after the show for her acting accolades and her looks.

The latest Mahabharat we saw was in 2013 and to bless our eyes, Pooja Sharma made her appearance as Draupadi and amazed us. Pooja Sharma’s acting accolades made her a star sensation.

Back in 1993, there came a show called Shri Krishna. The maker Ramanand Sagar brought the best Draupadi in the show. He portrayed Falguni Parekh, the beautiful lady on-screen. Falguni was well appreciated for her acting accolades. 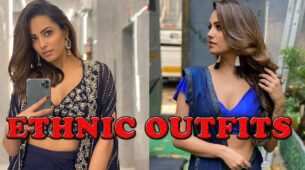 Shivangi Joshi, Anita Hassanandani, Sriti Jha: Who Looks The Most Gorgeous In A Designer Salwar Kameez?