Colors’ upcoming fiction offering Choti Sarrdaarni sketches the life of one such woman, Meher, who overcomes hardships and fights fearlessly to become an invincible mother. Based in the heartlands of Punjab’s Sardool Garh, the show traces the life of Meher Dhillon (played by Nimrit Kaur), a level headed Punjabi girl who dreams of a perfect life with, Manav (played by Hitesh Bharadwaj), the one she loves. But all her dreams and hopes come crashing down due to unforeseen circumstances created by Meher’s mother Kulwant (played by Anita Raj) and she is left to fight her own battles. She then meets Sarabjit Gill, (played by Avinesh Rekhi) a politician and a single father and her life take an unexpected turn. Fierce and full of fire, Meher emerges stronger, learns to combat her fears and becomes the protector of her family, a Choti Sarrdaarni.

The show stands true to the fact that there is no greater warrior than a mother protecting her child and highlights the multiple facets of Meher as a ‘Bahadarni’, who will be known as the Choti Sarrdaarni produced by Cockcrow and Shaika Entertainment.

Avinesh Rekhi, who plays the role of Sabarjit Gill says, “It is coming back to your family. I started my career with Colors and I am privileged. Again I am getting an opportunity to play the role of a Sardar so I am very happy about it. I take immense pride in the fact that I will be the first lead actor to sport turban on television with this show and I hope that I am able to carry it off with absolute grace and respect. The content of the story is very strong. The concept of Choti Sarrdaarni is very promising and comes with a powerful message and I am certain that the audience will love me in this new avatar.”

To know more about his personal likings and the show. Watch the video. 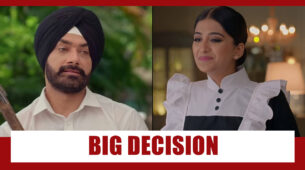