Mohsin Khan, aka Kartik from Yeh RishtaKya Kehlata Hai, is a stealing our heart with his acting, personality and good looks! When it comes to the viewership of Yeh Rishta Kya Kehlata Hai, majority of the audience are charmed by Mohsin Khan. The women are dying to meet him and the men all want to be like this handsome hunk who has all the women going head over heels for him! He even shares amazing on-screen chemistry on the show with this co-star Shivangi Joshi and fans love to see them together on the show.

One cannot deny he is one of the hottest and most handsome faces in the television industry. But did you all know-

•He is a family guy; in spite of his busy schedule, he often visits them, in his native small town. Now this has got to be a bonus for all those female fans of his out there.

•He has a brother and sister, the latter got married recently, and Mohsin Khan has always made it a point to ensure that family is always a priority for him.

•He studied Business Management from Mithibai College. He was an experimental guy, going as far as dyeing his hair and even going bald! Well, here’s a fully packed actor, with the looks, the brains and the edgy personality!

•His first appearance on TV was an advertisement of Ceat tyres, when he was 18, and this advertisement gained him a paycheck of Rs. 10,000, and it was his stepping stone to success. Mohsin Khan is the true heart-throb of tinsel town and his fans are increasing by the day, but that has stopped surprising is anymore! Ever since his big debut, he’s been on a rollercoaster ride, winning hearts, gaining fans and doing what he does best. 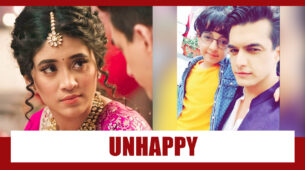 The Secret Connection Between Mohsin Khan And Aneri Vajani