Reyhna Pandit gets into a conversation with IWMBuzz.com on her role of Aliya in Kumkum Bhagya. Reyhna Pandit the talented actress who enthralled audiences with her vicious and negative portrayal in the supernatural show Manmohini is presently winning hearts as Aliya in Kumkum Bhagya, Zee TV’s popular and long-running show produced by Balaji Telefilms.

Says Reyhna, “When you get into a new role, there is not much pressure on you. But when you start to play a role that has been extremely popular, it is really tough. Yes, this puts me under pressure. But I always believe that working under pressure is good; it gets the best out of you. Having said this, I am nervous. But as days pass I am getting deeply involved with the character; I am starting to feel better.”

On working with the actors of Kumkum Bhagya, Reyhna states, “Luckily, the whole team is very nice. They are all professionals; they have been playing their parts for a while now. So I am learning by being with them. I am in love with Sriti (Jha). There is nobody as genuinely nice as her. Then there is Shabir, Krishna, Pooja, Mugdha; everybody is sweet. It is like being with a unit with young vibes.”

Ask her about the contrast in role after Manmohini and she avers, “Of course!! This is a very realistic story while Manmohini was from the fantasy world. There has been a lot of learning and unlearning for me with this role. There is a different take to every show. This is very contemporary, very real. Shabir is a very natural actor. So I am picking up nuances from all here. It is a different experience.”

On her character Aliya, Reyhna quips, “Aliya is confident, smart. She is proud of her money. She loves her blood and is over protective about Rhea and her brother. She does not care about anyone else. She is strong and knows how to cover her bull****.”

Had you followed Kumkum Bhagya earlier? “Of course. I used to watch the launch episodes. And I watched few from the recent episodes just to understand my character Aliya better. I have seen Shikha Singh in action, as I wanted to understand Aliya’s relationship with different characters.” 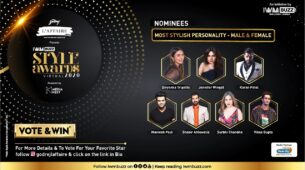