I am happy and satisfied with my small launch on the big screen with Love Yatri: Kartik Soni
Subscribe Now
Television | Celebrities

Kartik Soni who was recently seen in Siddhivinayak will be part of the Salman Khan Films movie, Love Yatri. Actor Kartik Soni who has featured in TV shows Sanskaar, Balika Vadhu, Ek Tha Raja Ek Thi Rani and Siddhivinayak is happy and satisfied with his first work on the big screen!!

Kartik will be seen in the Salman Khan Films movie Love Yatri, starring Aayush Sharma and Warina Hussain in lead roles which will release tomorrow.

Kartik plays Dakshesh, the youngest brother of Ronit Roy and plays chacha to the lead girl, Warina. He will be the funny bone in the family.

Talking about his experience shooting with big stars like Ronit Roy, Ram Kapoor, Manoj Joshi, Kartik sats, “This was a huge exposure for me. I had a great time shooting and learning from the big stars. I have worked earlier with Ronit Roy in a cameo performance of mine in the TV show, Bandini. This was a proper role with him. This is the first time I worked with Manoj Joshi.”

“This is a small launch into films for me, and I am happy with the experience,” he states.

Kartik Soni will now be seen in the upcoming movie, Bazaar wherein he will play an interesting role.

Kartik will also be part of the Season 2 of Sacred Games which will be on floor soon. The Season 1 of the Netflix Original was received well by masses.

Best of luck, Kartik for your big screen ventures!! 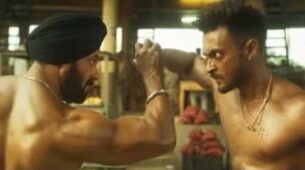