Some couples vacation with the cutest picture of them together easily melts our hearts for them. Hina Khan And Rohit Jaiswal NYC Vacations Cute Pictures also have done the same to us.

Hina Khan The Popular Actress and well known for her acting and style. Hina Khan is currently at the best phase of her career and the latest course of events surrounding the actress are just proof of that. Hina, who initially rose to fame by portraying the role of Akshara in the popular show Yeh Rishta Kya Kehlata Hai, later took part in the reality show Bigg Boss 11 where she was being declared as the runner up. Post that, the actress won everyone’s hearts yet again when she was roped in for playing the iconic vamp Komolika in Kasautii Zindagii Kay. This actress is seen to be fond of travelling and that is the reason why she is found on a vacay mode majorly. Hina Khan is currently holidaying in New York with boyfriend Rohit Jaiswal. They both came up Instagram uploaded their memoizing photos. Looking at the photos itself says they both are in deeply love with each other. They both exploring different places. The Highness of cuteness both the pair is looking for two splendid.

Photos have attracted lots of fans. People loving their pair. The real love birds sharing your photos on Instagram the fans are really loving it. The height of cuteness about the sharing with your photos is really mesmerizing. Pyaar stealing hearts of fans-from the photos. Overall, it can be said that the two of them have been getting some major relationship goals for all the young couples out there. 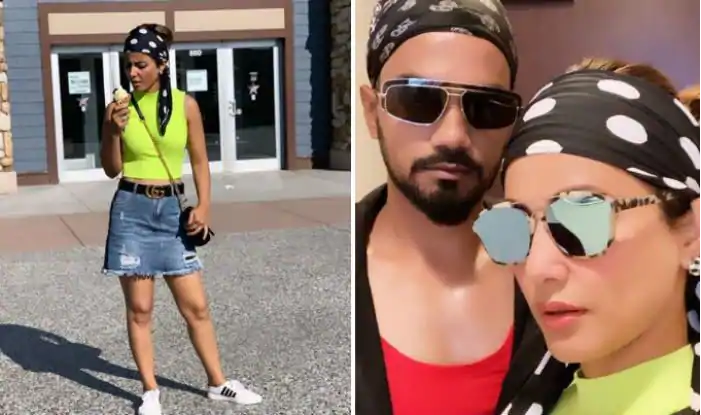 They are seen to be the way too cute and adorable in their New York Vacation Pictures.

OMG: A big scary scorpion pops up in front of Hina Khan, check out her unbelievable reaction

Hina Khan Shimmers And Sparkles In This Outfit, Have A Look

Here Some Glimpses Of Hina Khan In Desi Looks

Hina Khan has a serious question to ask her fans, your golden chance t...

Times When Chris Hemsworth Gave Glamour Looks With His Wife

OMG: Why is Hina Khan running away from the paparazzi?

Here Are 5 Resplendent Looks In Stunning Lehenga Of Hina Khan