Here are some few moment when Karan Patel was too hot to handle, which will get you through this week. Karan Patel started of his career in the year 2003 with the superhit show Kahaani Ghar Ghar Ki playing the character Vigyat. He has also appeared in the famous show ‘Kasauti Zindagi Ki’ of which presently remake is being is made Karan was the character played by him. According to the news he has quit the show in which he was playing Raman Bhalla since the last 6 years and he will be participating in the 10th season of Fear Factor Khatron Ke Khiladi. Karan Patel likes to keep his body in perfect shape and has been working really hard to do so. In the above picture we can see him doing triocep workout and displaying his bisecps for the camera and he looks very hot in this pic. This pic is from a cover photo of a magazine. The fit body of this handsome hunk is on display in the pic, the haircut and French shaven beard has increased the beauty of Karan. 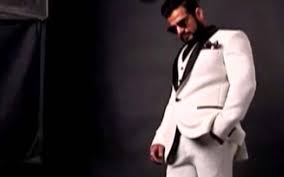 What can we say about this look of Karan. The white suit with black borders paired with black Sunglasses and on top of everything, swag of Karan. That’s enough from our side as you can guess what to expect from this

There are some of the hot moments from Karan Patel for this week. Let us all wait to see this amazing actor in the upcoming season of Khatron Ke Khiladi and perform the tasks fearlessly.

Khatron Ke Khiladi has been the most enriching adventure of my life: Karan Patel

Khatron Ke Khiladi 10: Karan Patel to get trapped between snakes