IndianWikiMedia gets into a candid chat with the popular actor… There are some actors who are lucky enough to have been bestowed with dual qualities of being immensely talented and good looking as well.  Add to that, the innate magnetism of turning fans into fanatics.

One such gifted personality is Leenesh Mattoo, the new television heartthrob who has made girls swoon over his drool worthy demeanour.

Enacting the part of Rudra in Star Plus’ popular show Ishqbaaaz, Leenesh has emerged as a force to reckon with, thumping his popularity and acumen clout in the small screen space.

Busy he is, but the young lad sneaked some time out for an exclusive chat with IndianWikiMedia. Excerpts:

How has your journey been with Ishqbaaaz?

It’s been incredible. I have created some wonderful memories on the set. I have seen myself growing as an actor. Every day is a learning experience for me. I won’t be able to express it through words but it has been a terrific one.

Tell us something about the bonding with your on-screen brothers?

We are all like a family. I would say we are like a house on fire. The way you see the bond between the three brothers in the show, it’s exactly the same in real life. We are good friends and it’s fun working with them.

The show majorly revolves around Nakuul Mehta and Surbhi Chandna’s characters. Do you ever feel getting sidelined?

Well, I never felt sidelined because I have my own track that’s been beautifully conceived. I am here to act and that’s what I concentrate on. My character has shown a wide range of emotions and that has just made me more confident as an actor.

Do you miss shooting with Nehalaxmi Iyer (she has moved on)?

Neha is fun to be with. I miss her on the show but apart from that we share great friendship which is what binds us.

Now you are paired opposite Mansi Srivastava, so how is your bonding with her?

Mansi and Neha are two different individuals. Mansi is a sweet person and the journey has just begun. I am enjoying shooting with her.

If you had to choose between Mansi or Neha as your co-star… who would you pick?

Neha and Mansi, both are different. I feel Neha was fit for the part she was playing and Mansi suits in her role perfectly. I think Mansi is doing complete justice to her character as a cop. I love both as my co-star.

If you were the viewer of the show which jodi would have been your favourite?

If I had to choose it would be Rudra and Bhavya (Me and Mansi) not because I am playing the part. It is because I feel out of the three jodis we depict a softer side wherein Bhavya tries to make me understand the seriousness of the scenario given my gullible nature.

When it comes to acting, who is your role model?

Acting is something I have learned by trying to feel the part I am enacting. Mr. Amitabh Bachchan is someone I always feel inspired by.

How do you keep yourself fit? Can you give few fitness tips for our fans?

Eat right and have cheat meals. Hit the gym and exercise for a healthy lifestyle.

Finally, what kind of roles would you want to enact in the future?

I would love to do an action packed role and other than that anything that challenges me as an actor. 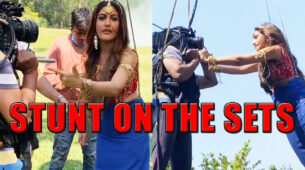