If I meet Rajan (Shahi) sir, I will hug him: Hina Khan
Subscribe Now
Television | Celebrities

Hina Khan talks about her new show, tiff with Rajan Shahi and more… Yes, we are taking about the bold and beautiful Hina Khan, who managed to steal audience’s heart with her magnificent performance in the daily. Hina left the show after she allegedly had a fall out with the ace producer of the show Rajan Shahi (Director’s Kut).

After a short break Hina is back with a bang. The actress is all set to take a new challenge as she participates in Colors’ popular reality show Khatron Ke Khiladi. Hina was looking ravishing in a cute green coloured outfit with twisted hairstyle and boots.

In a candid chat with Indianwikimedia, the self-proclaimed actress shared her excitement for the new project, spoke about her tiff with her mentor and more…Excerpts…

How excited are you to participate in KKK?

I am really excited. The show is being shot in Spain this time and I am really looking forward to the experience. I also wanted to participate in the famous Spanish Tomatino festival and get a nice face massage with tomatoes, however it takes place in August, I will be back by then. Be it the bull fights, or the beautiful locations and culture of Spain, I am really excited to experience all. And the magic is back with Rohit Shetty (host) so it will be a lot of fun.

Compared to other contestants, Geeta Phogat is really strong being a wrestler. Are you geared up for the contest?

Geeta is very tough, strong and she has got a lot of physical strength. I am sure she will be a tough competitor. But I believe more than physical, mental strength is very important.

So are you a mentally strong person?

I am mentally very strong. I am a very focused and a confident person in real life but I have never experienced scenarios with snakes & creep crawlies, so I don’t know how am I going to react. I did follow the previous seasons in bits and pieces. I am very nervous as it looks very scary. But Colors have really pushed me and team Endemol has given me a lot of confidence that I should try it once. Hence, I chose the show.

While you were away from screen for five months, what kept you busy?

They were many things that kept me busy other than work. Like giving time to my family which I could not do in these eight years, exploring myself and understanding what exactly I wanted to do. My family used to ask me why are you sitting alone in the room? Are you nervous or are you scared that you are not working? I said them that it’s been just three months. Since last eight years, I was surrounded by a lot people so now I am loving to stay in my room watching Netflix. I had to make them understand that this is the kind of life I want right now, the space which I did not get.

I studied in Delhi and just landed up in this industry. I never got a chance to explore myself. I wanted to go for cooking classes because this is the only thing I don’t know. I really want to prepare different cuisines. I believe a person should be an all rounder and being a girl I should know how to cook. Sometimes, I want to cook something special for my family or for my husband later when I get married. You feel nice when someone appreciates your effort.

As we all know that your wonderful stint with Yeh Rishta… ended on a negative note as you had a fall out with producer Rajan Shahi. So what do you have to say about it?

Rajan sir is like a father to me and he has always treated me like a daughter. He was so good to me, I have no complains. I fight with my father also.  It’s normal, it’s healthy. The only difference is that I was doing a show and not leaving with him in one house. Probably, if I stayed with Rajan sir in the same house than everything would have been normal. I don’t speak with my father for weeks. It happens with my mom also. After a point of time people make efforts. However, in this situation no one is there to make that effort. If I see Rajan sir, I will hug him. I am open to it, I have no hard feelings. They are doing great and I am doing good in my career. Life is too short for all these reactions. Let’s move on.

Not much, I would say. Indian television industry has still time to change. I think that is the reason we all are glued to Netflix because you get to see that content that you can’t make, perform and see on TV. I don’t see any change.

We wish you all the best for your new project! 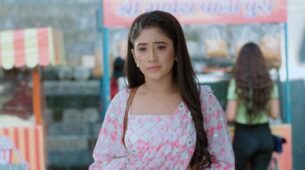