From modelling to movies to her big television break, here’s what you should know about Erica Fernandes before she became Kasautii Zindagii Kay’s new Prerna.

But last year the actress hit a jackpot when she grabbed the role of ‘Prerna’ in Ekta Kapoor’s reboot version of yesteryear popular show Kasautii Zindagii Kay. It was a clip on Facebook shared during the promo of her debut serial that caught Ekta’s attention and she had been wanting to cast Erica ever since. So far going by the audience reactions, Erica has nailed the role to the T. Now you may have only known her since her first TV show but Erica already had a few accomplishments in her kitty before coming into the Hindi television scene. In a career spanning 8 years, Erica has done movies in Bollywood as well as down south.

Let’s trace back her journey a bit; Erica dropped her studies in pursuit of a modelling career. She participated in various beauty pagents including Pantaloons Femina Miss Maharashtra 2011 among other. Post that, she entered the spotlight when she was chosen to play Virattu, a bilingual movie. It was followed by her debut in a Kannada film, Ninnindale in 2014.

She also did a Bollywood movie called Babloo Happy Hai and later had a Telugu release for which her role was much appreciated. 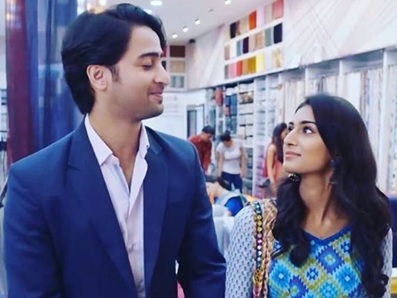 In 2016, Erica Fernandes finally arrived on the scene with her big television debut ‘Kuch Rang Pyaar ke Aise Bhi’. The TV serial focused on the relationship dynamics between a mother and son when the son falls in love and gets married.

Along with her sizzling chemistry with co-star Shaheer Sheikh, Erica made the audience fall in love with her character ‘Sonakshi Bose’, a strong & independent woman. So unlike the regular run of the mill shows, Kuch Rang Ke was an instant hit among the masses for focusing on a niche subject. Erica’s popularity only propelled further after the show and she became a household name.

Apart from wowing people with her acting chops, Erica also runs a popular beauty & lifestyle channel on YouTube with over 500K subscribers. In addition to it, she also has an Insta store where she sells jewellery designed by herself.

She’s a one talented girl, isn’t she?

Shivangi Joshi Vs Erica Fernandes Vs Rhea Sharma: Who Is The Best Star Plus Queen?

Cute video: Smarty Parth Samthaan has a song on his lips

4 Things You Hated About Star Plus Show Kasautii Zindagii Kay!