Nishkarsh has been gaining new insights on mythology and has a better understanding of them as compared to other kids of his age. Acting is a process wherein with each role, the artiste evolves and learns something new. Actors gain insights on various cultures and religion as the show and their character progresses. It’s a similar case for the extremely talented Nishkarsh Dixit, who is playing the role of Lord Ganesh in Sony Entertainment Television’s Vighnaharta Ganesh. As Lord Ganesh, Nishkarsh has been gaining new insights on mythology and has a better understanding of them as compared to other kids of his age. He has engrossed himself so much into the character that he is learning the Vedas and the Mantras to ensure he does complete justice to his on-screen character.

As per the current track, the show is taking viewers through the story of Durgmasur, who has stolen all the four Vedas and because of this, the Vedas have started losing all their powers and people on earth have forgotten the Vedic mantras. Lord Ganesh takes it upon himself to get the Vedas back from him. To revive the Vedic powers, he started chanting the mantras again and got the Vedas back from Durgmasur successfully. The four mantras that he chanted was ‘Om Asato ma Sadgamaya’, ‘Om Swasti Na Indro’, ‘Om Dyauha Shantirantariksha’ and ‘Gayatri Mantra’.

Since Nishkarsh had to enact the same, he learnt the Vedas and the mantras with great interest and ensured he got them and their pronunciations right. He used to memorize them whenever he got time and now, they have become a part of his life.

He said, “I had no knowledge about these Vedas and Mantras before but then for the track, my Director explained everything to me in detail so that I can get into my character even better. It is surprising how we use these Vedas during our prayers but never know their true meaning. For example, we sang ‘Om Asato ma Sadgamaya’ in our school as part of our prayers, without knowing what it meant but now that I know what its significance and meaning is, it just adds so much more value to what we have been reciting all these years. I now use these Mantras in my life to improve my concentration levels.”

Now that Nishkarsh knows the meaning and importance of these Vedic Chants, he shares the knowledge that he gains on the sets with his friends and family. Many didn’t have a clue that the famous Gayatri Mantra is also a Veda and Nishkarsh was more than happy to share with his friends in the society.

It is good to know that young minds are getting necessary exposure towards our mythological history through Sony Entertainment Television’s show Vighnaharta Ganesh. 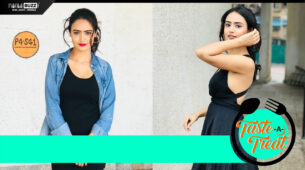