The show grabs attention in its opening episodes… 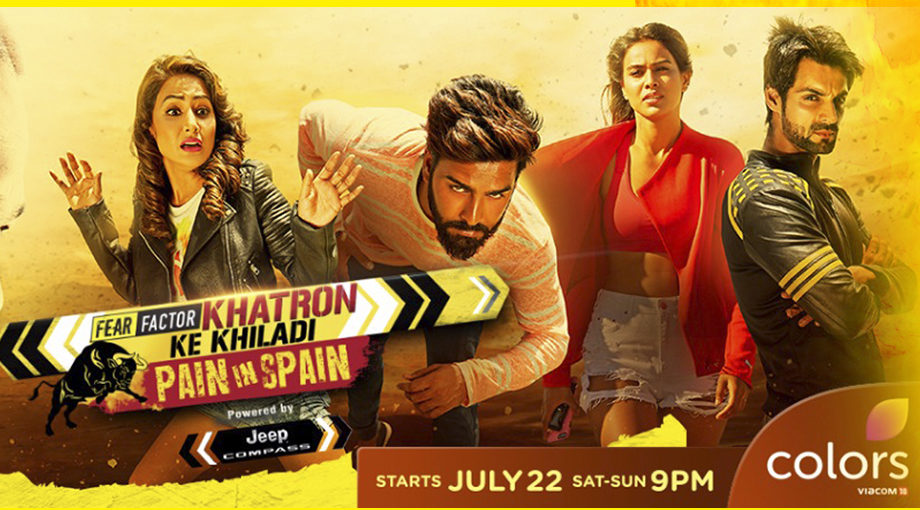 Fear, indeed is a potent emotion and also a remarkable source of entertainment.  Case in point is celeb stunt reality show, Khatron Ke Khiladi season 8, which kept us on the edge of our seats in its initial launch episodes, thanks to a script which was injected with dollops of adrenaline.

Host Rohit Shetty has so far lived up to the tagline of “Pain in  Spain”,  all the contestants (Nia Sharma, Manveer Gurjar, Lopamudra Raut, Geeta Phogat and Ravi Dubey among others)  are really being pushed to the edge.  Nia has cracked quite early, we could see the fear in her eyes and her screaming and howling showed how tough the tasks (snake and heights) are on hand.

We need to wait and watch, if her impatience to finish the task, would end her stint as warned by Rohit. She was already close to elimination during the yuckkkkkkkkkkkkkkkkkkky snake act with the action host giving her two warnings.

It was also interesting to see Hina Khan (Yeh Rishta Kya Kehlata Hai) come out of her demure TV bahu avatar and challenge her fears, she walked on the air borne bridge with confidence. The  fact that once ordinary guy Manveer Gurjar (Bigg Boss 10 winner),  who had never left  Indian shores, is now in Spain reflects the power of TV and of course, self confidence.

We also get to watch our TV bahus in beach wear (Nia, Hina and  Shiny Doshi) showing off  their curves in all glamour in this beautiful  European nation. As viewers, it is double fun for you not get to watch hottest TV actors doing jaw dropping stunts (indeed a good looking line up) in locales which keep you spell bounded.

The best part of this reality show as opposed to other reality shows is the support of fellow contestants. Ravi thanked Karan Wahi and Rithvik Dhanjani for their guidance in the snake act.  We guess the fear of pulling off stunts replace the competitive  zeal with cooperation. You appreciate the gumption the other is taking up and by egging them on in a way you keep your own spirits high, which is a very tough ask given the level of difficulty.

The camaraderie of best friends Monica Dogra and Shibani  Dandekar during the elimination water act was superb . Rohit also chipped in by giving friendly advice to Monica which enabled her to complete the act. The final difference was only a matter of seconds yet the former faced elimination. Luckily Rohit gave her a breather.

We are sure waiting to see what magic Dangal fame Geeta Phogat brings to the table as being a wrestler she knows how to push her body to limit.

In a bid to lower the tension the joke on the guys did help with   Karan, Rithvik and Shantanu Maheshwari dancing to hot tunes (Tip Tip Barsa Paani) in the pool and the famous Spanish dance, Chahat Ke Do Paal (Zindagi Na Milegi Dobara). The level of difficulty is definitely up a notch from earlier seasons, we are eager to find out what more horrors the contestants have to face as the contest heats up.

There was one big jarring note toward the end of second episode, the argument in the pool between Karan and Lopa over make-up, which did seem a bit off, for normally after a hard day of facing your worst fears one won’t resort to small fights.  Was it added to bring in masala element? Well after all it’s an entertainment show and what’s fun without some fight.

Overall KKK produced by Endemol India and airing on Colors makes for an entertaining watch. It’s a well researched product this time and the contestants do justice to the core idea of the show. Show aesthetically and with a high production value, it does wear the awe inspiring feel.

IndianWikiMedia would rate the show 3 out of 5 stars and would recommend its readers to watch and enjoy it for an exciting weekend breather.