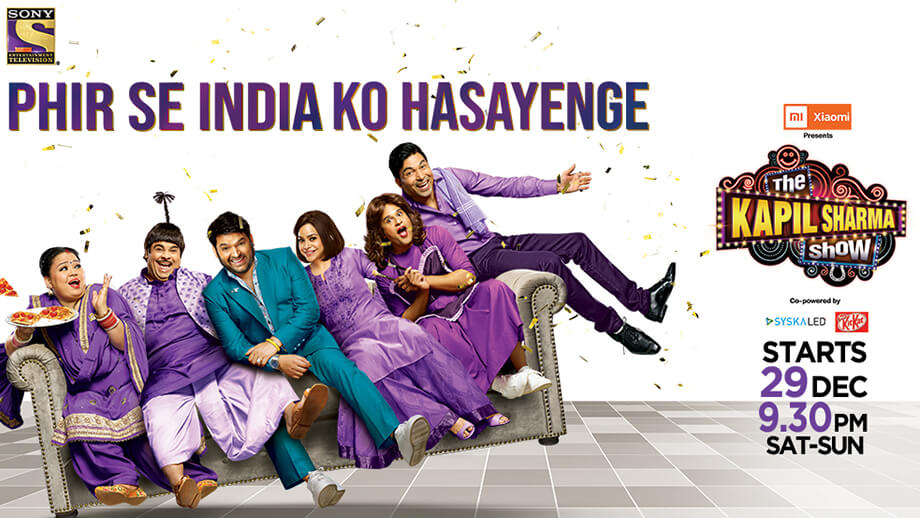 Kapil Sharma is rightfully called the King of TV Comedy. He certainly knows what digs to make to tickle your funny bone.

After TRP guzzler KBC ended in November last, Sony was waiting with bated breath for the return of The Kapil Sharma Show; and going by the fun we had watching its first two episodes, it seems that he has not lost his Midas touch in Season 3 as well.

The sketch-cum-format might appear similar, but hey, why repair something that is not broken. Its ill-fated Season 2 had also rated very well for whatever little time it ran.

Any true humour has to be self-deprecating; and here, Kapil and the entire team have taken lots of digs at themselves, for example, on Kapil not working and quitting shows (Comedy Nights with Kapil), and new entry, Krushna Abhishek, about working with rival Kapil. Interestingly, the latter had once called Kapil just a stand-up artist and himself, an all-round comic artist.

We are waiting for Kapil to give lots of unneeded silly advice, as per his new character.

His interaction with a young woman in the audience, who wanted to know whether she should get hitched, was funny. After correctly telling her to follow her heart, he casually flirted with her in his trademark style, saying if you don’t praise a beautiful woman, even that is her insult. It is this very walking the thin line that has always been Kapil’s USP.

Must Read: Sakshi Mahajan and Neha Pakai roped in for Mere Sai

Kudos to the creative for getting back Navjot Singh Sidhu as the judge, whose one-liners are always very entertaining. Even this Punjab politician, who recently returned from Pakistan, was not spared with a dig about him hoping to become the Prime Minister.

Another new entry on the show, Bharti Singh, was in her element as the sweet Indian woman who ends up saying a lot. So far, it has Kiku Sharda with his milkman avatar and husband of Bharti, who has most impressed us all. His joke about making lassi in the washing machine will resonate well with audiences up North. His other dig about Kapil having too much spare time on his hand was also well written.

We are hoping to see much more from Sumona Chakravarti, who is acting as Bharti’s younger sis.Something will surely happen between Kapil’s character and her; earlier, they were shown to be husband and wife.

Navin Prabhkar has also been really fun, especially his repartee with Kapil. The absence of Ali Asgar will be felt, if and when they have men-in-drag acts.

Although the acts add to the fun, it is really the B-town presence that sets the pace of these types of shows, and this season has been no different. The Simmba crew (Rohit Shetty, Ranveer Singh, Sara Ali Khan and Sonu Sood) really let its hair down in the premier weekend. Also, the fact that the film was doing well on its first three days made all the difference (their episode was telecast on Sat and Sun).

Cool Ranveer’s quips and antics are always fun to watch. Hope other Bollywood biggies would be as free as him. Here, the creative did not spare Ranveer as well, asking him about his limited guest list for his recent talk-of-the-town wedding with Deepika Padukone. He was very cagey when he replied that we had only called close friends.

Everyone took digs at Kapil for he had liked Deepika in an earlier episode. A lot of comparisons were also made between Kapil’s recent Punjab wedding to long-time girlfriend, Ginni Chatrath, and Deepika and Ranveer’s Italian destination matrimony.

Simmba director, Rohit, gave interesting inputs about the film, saying Sara herself called, asking to be part of the cast. Just one thing we did not like was the excessive praise of the actors. It is sad that B-town is still given royalty treatment over TV, which is a bigger revenue earner by any stretch of imagination.

With STAR Plus’ similar genre show, Kanpur Walle Khurana, getting a decent but not superhit opening numbers, the door is now open for Kapil to regain his numero uno billing. Also, we need to factor in the fact that Sony per se has a lower GRP than STAR Plus or Colors. So, for Kapil to rake in huge numbers is a tougher ladder to climb, which he had done earlier, but faltered for reasons we don’t need to discuss here.

Interestingly, we will not know how well The Kapil Sharma Show 3 has done for at least 2 months, as BARC is taking a breather; so the real acid test will only start in March. This will give team Kapil breathing space as the ratings of Kanpur Walle Khurana do weigh him down. And Kapil does need to earn back his name, which had taken a beating due to all the recent bad press.

The fact that STAR again brought in Kapil’s beta noir, Sunil Grover (infamous mid-air fracas), for Kanpur Walle Khurana, has only made this battle more bitter and personal.

We credit The Kapil Sharma Show with 3.5 out of 5 stars.