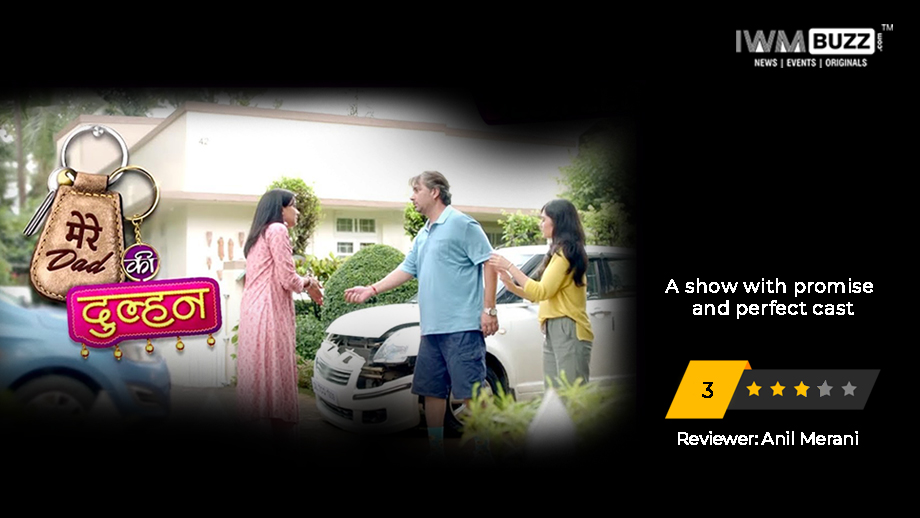 In India romance over 40 is still considered taboo, and especially if you have grown- up kids, it is more off limits. You will be laughed at in the circle you are in.

This in a nutshell is the story of new Sony show, Meri Dad Ki Dulhan (DJ’s – A Creative Unit). It is not a novel concept by any stretch remember Bade Acchhe Laggte Hain and more recently Patiala Babes. Since all are Sony offerings, can we assume that it is more liberal in thought process than other channels?

The casting is spot on, widower Varun Badola is apt as social enemy Amber Sharma who is always ready to fight at the drop of a hat.

Shweta Tiwari perfectly blends in as the 40 years single Guneet Sikka, who was cheated of her life savings by an online conman. What we liked was that she was not ashamed of trying to find love at her age.

Last but not the least, Anjali Tatrari is right as Amber ‘s 20 odd tech whiz daughter Nia who is ready to put her career (US training) on the line for her dad. She was part of the core team behind the app which saw Guneet lose 18 lacs.

Nia is given a normal urban girl look. Interestingly had this show been online, they would have made her wear next to nothing and al do dope, but here they did not show her touching alcohol at office party. She also strictly follows curfew hours as well.

Varun has put on weight for his character as most middle age men don’t really take care of their looks. He also no qualms about sporting salt and pepper hair. Hope other actors were as confident in their skin.

Like most fathers, Amber is very scared of letting his daughter go to the US of A and puts up a grumpy attitude. It is both a fear of whether she will be able to take care of herself and also of himself losing his sole anchor. He has no friends.

The father daughter interaction is really fun, just how close they are can be judged by the fact that she openly talks about dating and body parts, considering that most Indian girls are still very coy in front of their dads.

The scene in the theatre when she fights for father, brought heft to her character board.

Her line that her father gets very difficult to handle and yet she loves him, is cornerstone of all parent child relations. We all have had similar experiences at one or the other time, have we not??

Among all characters Amber has been etched out well. I guess for he has most colors, others seem more straight jacketed till now. Constant firing of employee (have we not seen that before), not mixing with neighbours (major urban issue) is what Amber does.

The generation gap was best shown when dad still uses desktop PC, while beti is on her lappy. Both wipe out their respective browsing histories.

The scene where Amber tries to scare Nia by giving out Bay Area (California) crime stats, but she turns the table by spilling the beans on how bad their native Ghaiziabad is as well was really funny but poignant.

Amber eventually comes around for he loves his daughter too much. His buying of new phone for video chat marks the changing parameter of communications.

We just wonder how the story will pan out now?

Nia might find love in her office boss Kabir (Vijay Tilani). He tries to make her smell the coffee about coming out of her comfort zone. Amber was very rude to him even calling him names.

Guneet’s over talktive mom completes the core cast, she represents the mother class who is worried that their daughter is still single. Guneet does not have the stomach to tell her mom about the con, for she was very happy that finally Guneet might settle down.

So far the show has ticked all the boxes. I can’t find any major blemishes but as they say devil lies in the detail and in TV, the real game starts when the show is a few weeks old.

Luckily for Sony, low numbers is not a major bugbear, unlike other networks so they will not change story mid-way.

Having said that Sony fiction slate is surely on the upswing with Tara from Satara getting good reviews/numbers, for the off the curve story. The return of Beyhadh 2 will give the channel another boost.

Hope the makers continue to deal with this sensitive matter in the same mature manner so far.

I just have one question in most such cases – why is the womann shown single (Bade Acchhe Laggte Hain). Why can’t we accept that a woman besides being a mother is a lady as well. She can want to find love again. We also need to come around to face the harsh truth that even women have certain biological needs. It is very tough for us to accept that single women in our family might also want love.

It seems as though Sony TV and DJ’s – A Creative Unit spearheaded by Tony Singh and Deeya Singh have a winner up their sleeve with Mere Dad Ki Dulhan. The show has to perform for more of the makers to explore and experiment!!