IWMBuzz.com reviews the Star Plus and Rajan Shahi show Anupamaa. 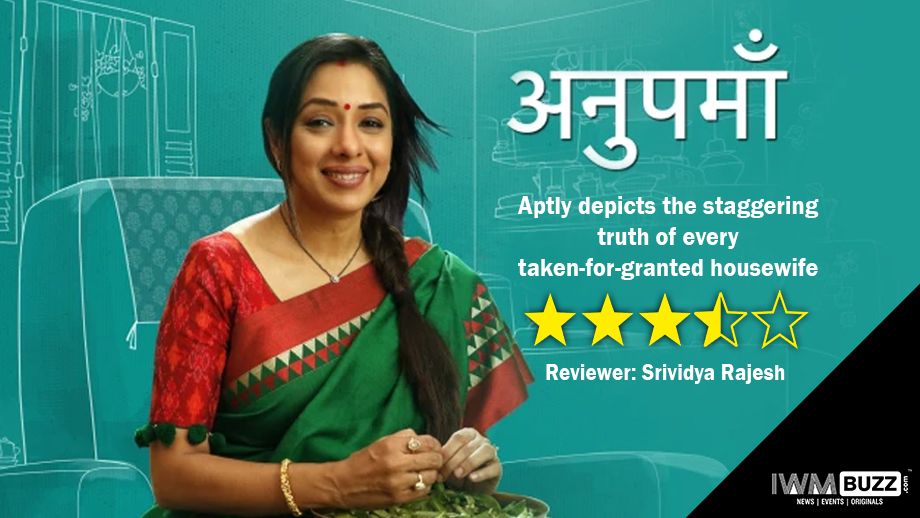 Anupamaa the new Rajan Shahi presentation on Star Plus starts with a ‘Thu Thus Thu’ slate board which takes us to the abode of Vanraj Shah (Sudhanshu Pandey) and the stunning opening visuals of Anupamaa (Rupali Ganguly) welcoming the Sun God with her puja.

Anupamaa the Gruhalaxmi of the house is an ideal example of being the sacrificial wife, mother and daughter-in-law. She keeps her house and family before everything, and if it can be said, this is the only folly in her.

Anupamaa is not much educated, got married when she had to study!! She does not know the ABC of English language and this is the drawback that even her kids point out in her. She does not fit into the bill of the big-town mother who is proficient in her speaking language. She does not have the confidence and spark in moving with the elite group.

But having spoken about her negatives, let us come to her positives!!

Anupamaa is a great cook and has lived her life in her home’s kitchen, cooking the best of delicacies. She is a respectful daughter-in-law who gets admonished by her family, especially her mother-in-law and husband on her so-called shortcomings. However, it is her son Samar (Paras Kalnawat) and father-in-law who keep her spirits high amidst all the backlash she receives from her family.

The best part of the show is the rapport she shares with her son Samar. He is her constant support and cheer-leader if you can say that!! She dances with him, laughs with him and above all, shares her grief with him.

The other kids Toshi aka Paritosh (Aashish Mehrotra) and Paakhi (Muskan Bamne) are either silent spectators to Anupamaa being at the receiving end of ridicules, or they themselves are not aware of their mother’s plusses. Paakhi’s school funfair is the best example to how she sees her mother unfit to compete in the school competition. A sad thought indeed, but beautifully presented, as it is again a reflection to what we see in the society around us.

While watching the show, how as women, one would want to stand up and raise voice for Anupamaa, and this will mostly be the key audience to this show. This will surely be a must-watch for housewives, who will surely see all of this happening to them in their lives. But the point is how many of the young audience will open up to a show like this, which is fully relatable and is devoid of masala? The ratings for the show will come with word of mouth, and acceptance from a larger circle of people, irrespective of age and gender will give it a win-win comfort.

Coming to Vanraj, he is the typical example of a male chauvinist who belittles his wife at every possible phase in life. My question is – how did he go on to marry Anupamaa when he has loved only her cooking and nothing about her individuality has excited him? A dual-faced hypocrite Vanraj is, who has the courage to have a love life out of his marriage in his colleague and friend, Kavya (Madalsa Sharma).

Kavya who is seeking a divorce from her husband has found love, fame and money in the company of Vanraj. She indirectly competes with the wife Anupamaa and feels lost when Anupamaa’s efforts are appreciated. But with her having pocketed Vanraj’s trust, she has everything to gain and nothing to lose here!!

Wonder how Anupamaa will react when she will get to know of the reality of Vanraj-Kavya relationship? It will be earth-shattering for sure, but it is to be seen if that will be the catalyst to her growth as an individual.

Speaking of performances, Rupali Ganguly as Anupamaa is perfect in her place. Her minute detailing when it comes to facial expressions is flawless. Her smile, her moment of pride taking the trophy from her daughter’s hand, her victory walk with her husband from the stage are all memorable. A great actress, Rupali is doing full justice to her emotional scenes too.

Sudhanshu is again a class actor and he shows his power and tyranny in the role that he plays. I would like to see the back story to how the man tilted away from the love of his wife!! His scenes with Kavya have been good, where he shows his light-hearted and romantic attitude.

Madalsa Sharma has been good, doing what she has been asked to do.

Veteran actors Arvind Vaidya and Alpnana Buch are a delight to watch and have it in them to carry a scene with merit all by themselves.

Youngsters Paras Kalnawat, Aashish Mehrotra and Muskaan Bamne are perfectly cast. Paras and his scenes with Rupali are real show-stealers and I hope his character remains the apple of his mother’s eye forever.

It has always been the speciality of Director’s Kut and Rajan Shahi to give the best of scenic beauty in their sequences. The artistic beauty of the place where Anupamaa went to with her friends in the first episode was captured magnificently. Anupamaa’s dance was outstanding amidst the great locale. Talking of dance, how amazing a dancer Rupali is, and it has already been proven in the show.

The cinematography is top-notch, and the production value is at its best.

Overall, there is not much of a flaw in the concept or its presentation. It is now up to the audience to give it a green flag. As said earlier, the only drawback the show sees is that it does not have the usual lovey-dovey romance of a young male lead and female lead. Also, its realistic portrayal and the family and housewife based story might not appeal to the youngsters. Having said this, Indian television will get a huge boost if such shows work, as there is so much on the platter when it comes to the mirroring of today’s society that is shown in the show.

IWMBuzz.com credits the show with 3.5 stars, even though I want to give it 4 stars. I reserve the half star for the audience and put the onus on them to shower the show with love.