Beyhadh fans’ wait to see their favourite Jennifer Winget back in action in season two of this psycho love story has just got a bit longer.

Producer Prateek Sharma, who was speaking to the media on the occasion of the launch of his new Star Bharat show, Sufiyana Pyaar Mera, said, “While Beyhadh 2 will surely happen, with its content still under discussion, you will have to wait either till year end or early 2020 for the telecast. Even last time we had taken lots of time before going on the floors. We need to be bang on.”

Prateek, who was earlier creative producer when Cinevistaas Limited was helming Behyadh 1, will now be producer in its much-awaited sequel.

When asked as to who will star opposite Jennifer in place of Kushal Tandon, he said, “It is too early to say, as we are still drafting the story and character sketches.”

On the fans’ demand of taking Jenny’s Bepannaah co-star Harshad Chopda, he said, “I can’t comment, for the actor has to fit the character; and the story is in the process of being weaved, as mentioned above.”

When asked what the biggest learning curve from season 1 of Beyhadh was, he said, “Grey is the new flavour of the season and not black or white. I was quite scared to put up Maya (Jennifer’s character’s name) with all her complexities and negativity, yet she went on to win the hearts of the audiences.”

“I could not have thought anybody other than Jennifer could play this role. I have always maintained that this highly talented actor has surpassed my abilities as writer with her performances,” ended he. 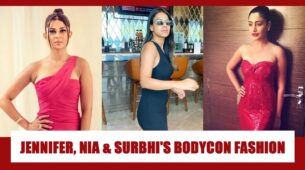