TV bahu Devoleena Bhattacharjee, who rose to fame as Gopi from Saath Nibhana Saathiya, has been entertaining audience with her stint in Bigg Boss 13.

However, there is a piece of bad news for all her fans. As per Khabri, the actress has injured her back on the show during a task hence she might quit the show.

As per a report, a doctor from Nanavati hospital was called by consultation. Also, Devoleena might not perform in this week’s task and there are chances that she might bid adieu to the show. Take a look at the tweet.

Devoleena Bhattacharjee has fallen ill a doctor has advised Devoleena bed rest. She may not perform this week’s task.
this mean the actor is quitting the show (High Chances)

We wish Devoleena a speedy recovery and hope she continues her journey in Bigg Boss 13. 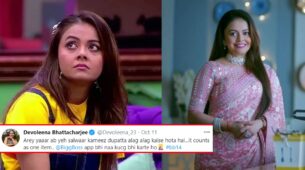