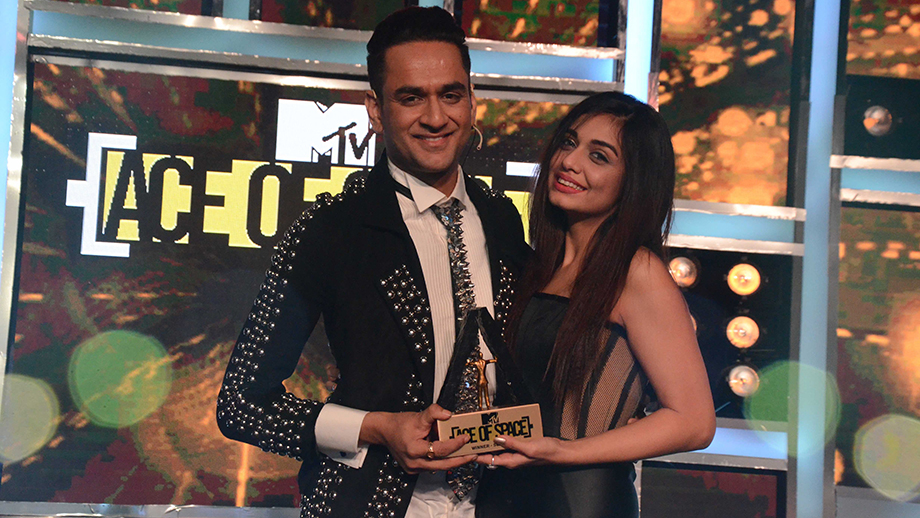 It’s indeed a Happy New Year for Divya Agarwal who has been adjudged as the winner of the reality show MTV Ace of Space. In an astounding grand finale, as big as any Bollywood film awards, Divya clinched the title of the show outdoing 5 other finalists Faizy Boo, Pratik, Varun Sood, Shehzad Deol and Miesha Iyer. Mastermind Vikas Gupta also announced Pratik and Varun as the first and second runner up respectively.

Launched as a twisted social experiment with 18 contestants battling it out against shrinking walls and daunting challenges, MTV Ace of Space became a roller coaster ride of broken bonds, mended friendships and emotional upheavals. Over the last 73 days, the show chartered stupendous growth as a one of a kind reality show with audience support pouring in large numbers. From a gay model to a plus size beauty to handsome hunks to an ever-swaggy rapper, MTV Ace of Space broke stereotypes by getting the most contrasting of people together under one roof. And to top it all, was Mastermind Vikas Gupta who threw curveballs and turned the game over.

Touted as the biggest year ender party by the Mastermind, MTV Ace of Space grand finale was a dazzling night packed with performances, speeches and more. Highlight of the evening were the ‘Case of Space’ awards, curated to gratify the contestants with quirky titles. While Miesha was titled ‘Ms. Do Little’, Chetna took away the title of ‘House Hottie’ with Shehzaad being declared as “Aaramzaade’. Social media favourites Varun Sood & Divya Agarwal however ended up being titled as ‘Pendullum’ much to the glee of the contestants.

The finale also saw a He Vs She on the dance floor with the girls of the house setting the stage on fire with their thumkas. The boys weren’t far behind as they gave drool-worthy performances on the biggest hits of the year. The dynamic duos of the house, Varun-Divya and Shehzad-Miesha also added an ounce of love to the show with their romantic acts.

On winning the show, Divya said, “This has been an overwhelming experience. MTV Ace of Space challenged me to ride over my fears like never before. Surviving in a house with shrinking walls and complete strangers was an ultimate test of patience and I am happy I could come out stronger. I have learnt a lot about myself and people in this journey. While this win feels surreal, I thank my parents, Varun and our Mastermind Vikas Gupta for the unending support and the audience for their love.”

Commenting on the grand finale of Ace of Space, Vikas Gupta, the Mastermind of the house, said “With MTV Ace of Space we brought to life, a unique and challenging social experiment to see how far your survival instincts can take you. For the last 73 days, this has been my home. Not only did we witness an interesting journey of people and their emotions here, the show also triggered a positive word of mouth amongst fans and raked in tremendous support. I have thoroughly enjoyed my role as Mastermind tricking the game whenever possible and being a guide to the contestants. I wish Divya the best on the journey ahead and hope that all of us are taking away something good from this experience.”

One of the biggest reality shows of the year, MTV Ace of Space introduced the audience with an out of the box concept and unique personalities.