The IFTDA (The Indian Film & Television Director’s Association) Elections 2018 results are out!!!

And here is IWMBuzz.com giving our loyal readers a brief on the results.

Ashoke Pandit Group has won the IFTDA  Elections by a sweeping margin..

As per the first reports got, “Ashoke Pandit Group won with 80 percent votes in their favour with Ashwini Chaudhary lead Progressive  Director’s Alliance Group getting 20 percent of votes.”

We hear that Ashoke Pandit Group won all the 24 seats. And this kind of success rate has been accomplished for the first time in the history of IFTDA elections is what we hear.

With this, Ashoke Pandit will preside over the running of the Directors’ body as the President.

We at IWMBuzz.com got to talk to Ashoke Pandit who was overwhelmed with gratitude for the huge turnout of Directors who stood in his support and voted for his group. “I am very emotional at the moment. We had a clean sweep, by winning all the 24 seats with a huge winning margin of 80 percent of votes. All the big Directors from movies like Rajkumar Santoshi, Madhur Bhandarkar, Anand Rai and the senior Directors from TV, Rajan Shahi, B.P. Singh and others voted for us. It was a great feeling to see all of them coming in to vote for us. I saw their love today and it was overwhelming. I thank all of them for giving us this win.”

We hear that nearly 930 members from the IFTDA fraternity cast their votes today.

Indeed a memorable achievement this, for Ashoke Pandit and Group. Hiten, Ashoke, Sehban, Ravi, Ashwin and Anupriya to feature in a short film titled 'The Confession' 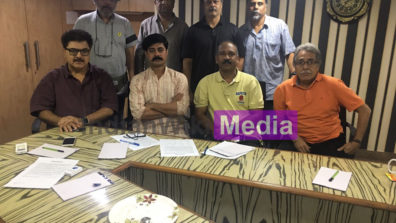