Taarak Mehta Ka Ooltah Chashmah produced by Neela Film Productions Private Limited on Sony Sab is one of the longest-running shows of Indian Television. The show completed a glorious 11 years last year. However, the show apparently has landed in soup.

As per the latest reports in Mumbai Mirror, makers of Taarak Mehta Ka Ooltah Chashmah received open threat from Raj Thackeray’s party Maharashtra Navnirman Sena over calling Hindi language as the most common language of Mumbai. The president of cinema wing Ameya Khopkar also demanded an apology from the makers.

Ameya wrote a warning note for the actors and makers stating that despite knowing that Marathi is Mumbai’s main language they promote such propaganda. He stated that these Gujarati “insects” must be stopped. He further mentioned in the tweet note that the Maharashtrian actors who are part of the show should be ashamed to support such a statement. Check out the tweet.

Now, producer Asit Kumarr Modi has taken to Twitter and stated that there is no doubt that in Mumbai Marathi is the main language. He also said that he is a Maharashtrian, Gujarati and as an Indian respects all the language. Check his tweet.

The makers also aired a segment in tonight’s episode (March 3) clarifying their stand and stated that the only thing they like to spread is love.

The only thing we believe in spreading is love and happiness! We apologize if we have hurted any sentiments through our show. We believe in unity in diversity & respect for each and every religion and its mother tongue. Keep smiling & keep watching #TMKOC! @AsitKumarrModi @sabtv pic.twitter.com/WoIYgyNo3n

In last night’s episode, Bapu Ji (Amit Bhatt) tells his son Jethalal (Dilip Joshi) and other residents of their society to use Hindi language to end a dispute over writing a Suvichar on the society board in a preferred language. He advises them that they are in Mumbai, hence they should use Hindi which can be understood by all. 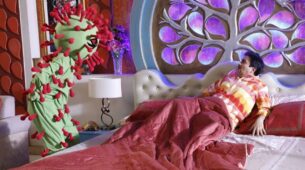