Last weekend was one of glitz, glam and a lot of oomph in MTV Ace Of Space 2 house. With Diwali celebrations ringing in, inmates got a breather ahead of the final battle. Mastermind Vikas Gupta was unlike his usual self as he surprised the inmates with a visit and handed over desi attires to them. Houseguests got emotional upon seeing him and were seen indulging in some quality time with Vikas.

But it’s not all hunky dory as it seems. Back to the battle, it’s now down to the Top 10 and survival has never been more challenging. Amidst the crunching walls and trembling confidence, another celebrity guest added onto the fun and this time, it was none other than the ever gorgeous Neha Dhupia. Dressed in a blue couture with nude make up, she interacted with the contestants and also gave them a reality check by giving the viewers perspective.

On her visit Neha said, “I have heard about the show so much that I just had to make it to MTV Ace of Space S2. It was really exciting to interact with the contestants and be a part of the madness. I can’t even fathom how difficult it must be to live in amidst so much of chaos, competition and shrinking spaces. Our physical and mental abilities are put on the edge in such situations but it’s great to know that these contestants have been able to do it so well. Their sense of spirit is infectious. There are few contestants I have known from the time of Roadies but I truly hope the deserving one wins.” 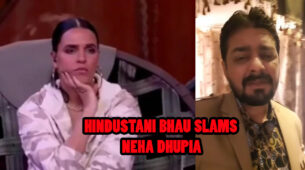