The last episode of MTV Ace of Space 2 saw Roadies fame Baseer Ali creating a stir by banging doors for food. Baseer, along with OHM grabbed all the eyeballs on Day 1 and Mastermind Vikas Gupta was definitely in no mood to spare them!

In a series of retorts and arguments, Baseer and OHM are seen leaving the rooms and getting into the activity area, as commanded by Vikas, and we wonder what he is up to! But, it doesn’t end here. Deepak Thakur also speaks about Baseer’s aggressive behavior. After all this Vikas introduces the first task to the houseguests called – Hold your space. The Have’s and the Have Not’s are divided into 2 teams. Each team comprises of 6 members to perform the task. The houseguests have to stand on the triangular-shaped object and the opposite team has to find ways to distract them. Whichever team manages to stand for longer time wins the task and also the winning team gets a chance to save themselves from the nominations.

Who gets lucky to win the task and save themselves from the nominations? 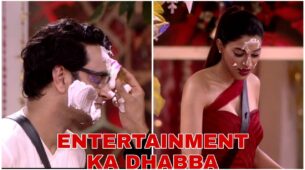