Producer Gul Khan breaks hearts with the proclamation on social media about her not having plans for Iss Pyaar Ko Kya Naam Doon 4. There is bad news for Barun Sobti and Sanaya Irani fans. Iss Pyaar Ko Kya Naam Doon (IPKKND) Producer Gul Khan has scotched the social media buzz that she might be toying with the idea of coming up with IPKKND 4, starring the above famous Season 1 jodi, with the below Instagram conversation with a fan.

However, another thread does not rule out Gul working with Barun again. 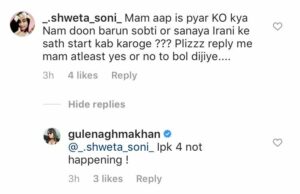 IPKKND 3, toplining Barun and Shivani Tomar had shut shop in a few months in 2017, amid fan protests over Sanaya’s absence.

Gul Khan recently had a good run with Ishqbaaaz. She has Kulfi Kumar Bajewala and Nazar doing well, both being on Star Plus.

Since then, Barun has done a couple of web projects and now has again expressed interest in limited TV series.

Sanaya has now moved to films with a Vikram Bhatt supernatural project, Ghost.

We dropped a text to Gul, asking for more information.

We sure hope to see Gul and Barun weave their magic again.