Sony Entertainment Television popular show The Kapil Sharma Show is known for its star guests and the quirky secrets they reveal on the stage.

Now, we hear, Priyanka Chopra Jonas will be seen making an appearance on the sets of the show to promote her upcoming film The Sky Is Pink. She will be seen having a gala time and spilling the beans about her shoot.

Are you excited for the upcoming episode? Drop your comment in the section below. 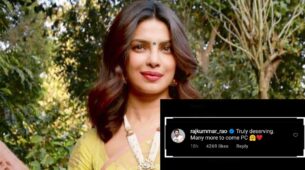