It is going to be a blast of a Grand Finale in Bigg Boss house with the Weekend Ka Vaar being very eventful this time around. 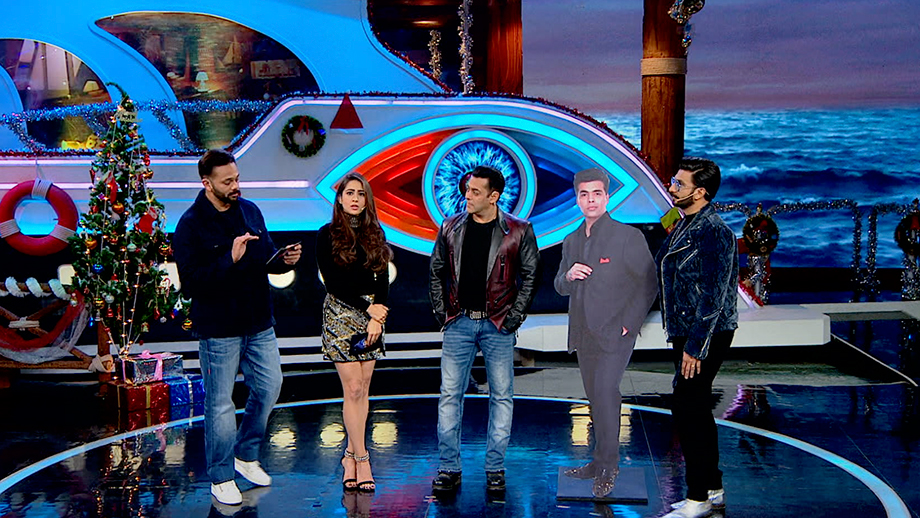 Ranveer Singh, Sara Ali Khan and Rohit Shetty made a grand entry on the Bigg Boss stage with the popular song ‘Ala re ala Simbaa ala’ from their upcoming movie Simbaa. Salman Khan asked the team about Karan Johar’s absence to which Ranveer immediately got a cut out of Karan on stage and also imitated him. As Karan Johar is famous for his rapid fire rounds, Salman Khan also decided to play the same with Ranveer enacting Karan. The rule was that, he had to answer all the questions on behalf of Karan Johar and his answer could only be Haan or Nahi Nahi Kabhi Nahi.

Salman Khan, Rohit Shetty and Sara Ali Khan asked random questions to Ranveer, and he mirrored Karan throughout the round. In one instance, he even danced to Karan Johar’s favourite song ‘Radha Teri Chunri.’  Ranveer’s hysterical performance left everyone beaming with laughter. Later, they proceeded to meet the contestants inside the house.

Prior to their entry the contestants were given a task to rank each other from 1 to 7, and decide who they thought were the most eligible contestants to make it to the top three. Everyone tried to put forward their thoughts and rank. Salman Khan questioned them on this, and made the contestants realize that they did not focus on putting their co-contestants on top rather on the last spots. Salman Khan also told everyone that it was their only chance to get their act straight and put all their efforts as finale is just a few days away.

With Surbhi getting the ticket to finale, the other 6 contestants Karanvir, Dipika, Sreesanth, Romil, Deepak and Somi still have the fear of eliminations hovering around them.

Who will make the cut to finale, and who will be eliminated from the Bigg Boss 12 house?