Versatile television actor Ravi Dubey recently had a fanboy moment when he clicked a selfie with none other than diva Kareena Kapoor. He also posted the pic on his Instagram account, along with a cute caption

Ravi has also added the hashtag #EternalCrush to his post ?.

Handsome hunk Ravi hit the star circuit with his super hit Zee TV show, Jamai Raja. And he is all set to star in the highly anticipated Season 2 of the show, along with his original leading lady, Nia Sharma. Yes, Jamai Raja is returning, albeit in a fresh digital avatar, on Zee TV’s digital platform, Zee5. Labeled Jamai2.0, it will appear in the form of a web series on your screens.

Ravi Dubey recently visited the sets of dance reality show, Dance India Dance, for the promotions of Jamai Raja Season 2. Kareena Kapoor is one of the judges of this season of DID, which is how Ravi had the good fortune to meet his ‘eternal crush’ Kareena.

Wishing you lots more such fanboy moments, Ravi! And also, best of luck for Jamai Raja 2.

For fans of the show, here’s a juicy bit of info — Jamai Raja 2 is slated to premier on 10 September on Zee5. 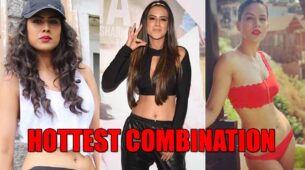