Upcoming Zee network Punjabi channel, Zee Punjabi, is gearing up for a big ticket launch with three or four shows. Apart from a couple of fiction offerings, including Kamli Ishq Di (Big Synergy) and Khasma Nu Khani, one of which might soon go on the floors, channel mandarins are also planning to bring the Punjabi version of its hit Hindi musical reality show, Sa Re Ga Ma Pa. “Punjab has a rich heritage of music, with several young and upcoming singers launching their own music videos. Sa Re Ga Ma Pa can give their career a much needed boost,” added our source.

“Talks are on to find big names for the jury and the host,” ended our source.

Sa Re Ga Ma Pa has been a huge hit on Zee and network executives are hopeful that it will give similar numbers in the north west of the country.

We tried to get in touch with the channel spokesperson, but could not get through to them till the time of filing of this story.

Zee Punjabi fiction head Prashant Bhatt said he can reveal more details on the above fiction offerings only after today’s channel launch press conference in Chandigarh. 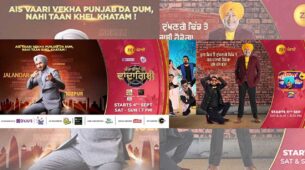 Our shows are rooted in Punjabiyat and bring alive the Punjabi way of... I was 18 years old when I landed my first job on television with Sa Re... ZEE to redefine the future of entertainment, to onboard 500+ tech afic... Himesh Reshammiya and Vishal Dadlani return as judges for Sa Re Ga Ma... Review Of Radhe: Is Strictly For The Salmaniacs