Umang Jain was recently awarded for her contribution in performing arts in TV and Cinema by the AIAC Golden Achiever Awards. 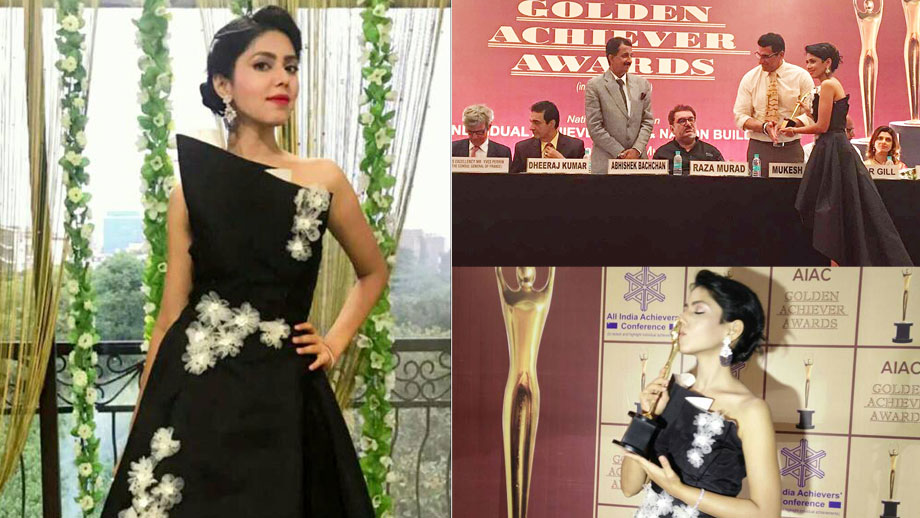 Actor Umang Jain is happy and elated on being honoured with a prestigious award in the category of performing arts in Television and Cinema at the AIAC Golden Achiever Awards held recently.

Umang who has worked across all mediums, from the 70mm screens to the mobile screen content (which actually qualified to meritocracy along with 4 films, 17 shows (13 as a child actor and four as grownup), 350 + TVCs, print, documentaries, music videos, docudrama, short films gags etc received the award amidst people not only from the film fraternity but also from different fields.

Says Umang, “A big thank you to AIAC, Abhishek Sir, Jyothi Sir for appreciating my endeavour in the field of performing arts. The reason why this particular beauty makes it to my list of memorabilia is because I was awarded with the most charismatic personalities in different fields; be it the deputy commissioner of Income Tax or the lady who made 3 world records by driving solo across 32 countries, or his Excellency of the French Consulate and many more of such eminent diginaries. It is a moment of respect and aspiration to be awarded in front of and along with your seniors such as Himani Shivpuriji or Indira Krishnanji or Varsha Usagaonkarji or Dheeraj Kumarji who have dedicated their whole lives to acting. A big thank you to everyone who has ever been a part of this painstaking yet rewarding journey. I value your contribution with all my heart, body, mind and soul. A big thank you to everyone who ever believed in my talent and offered me their faith in terms of work. A heartfelt thank you to Raghuvir Sir.”

Umang recently enthralled one and all in Yeh Rishta Kya Kehlata Hai and Khatmal-E-Ishq on the TV screen.

Umang, Indianwikimedia.com wishes you on your success and all the best for future endeavors. What Will Happen Next With Kartik And Naira In Yeh Rishta Kya Kehlata Hai?